Draw with Spain ideal lead in to knockout stage for Kookaburras

A blistering Spanish goal in the final 48 seconds has ended a winning run for the Kookaburras at Tokyo 2020, but the 1-1 result ensured the Australians finish top of Pool A heading into the quarter-finals.

A blistering Spanish goal in the final 48 seconds has ended a winning run for the Kookaburras at Tokyo 2020, but the 1-1 result ensured the Australians finish top of Pool A heading into the quarter-finals.

After Tom Wickham had given the Kookaburras an 18th minute lead, a nail-biting finish ensued with three-time Olympian Pau Quemada Cadafalch keeping Spain in the Tokyo tournament by scoring off a penalty corner in the dying moments of the match.

The result foiled Australia’s perfect record, but the tough encounter against a Spain team that sat deep in their own half for much of the contest was ideal for what lies ahead in the tournament’s business end.

“Spain was very motivated today, they needed a result, they got a point from it so that keeps them in the competition,” Kookaburras head coach Colin Batch said.

“It’s easy to be disappointed about that result and straight after the game the guys were.

“The reality is we have been playing strongly for the five pool matches and we finished on top of the pool.

“We qualified easily for the quarter-finals, it is important to acknowledge that, and now we need to review this game, get the learnings out of it and move on to Sunday.”

Co-captain Aran Zalewski noted the importance of the Kookaburras playing against their first European opponent in 18 months.

The Margaret River product, who is two matches off reaching the 200-game milestone, believes this experience will hold the Kookaburras in good stead.

“We came out against a really desperate and good Spanish team that defended really well today and made it really difficult for us,” Zalewski said.

“It’s a great challenge for us heading into a quarter-final, we might play someone similar, we’ve had lots of different opponents playing different styles – so it was another challenge today with Spain.” 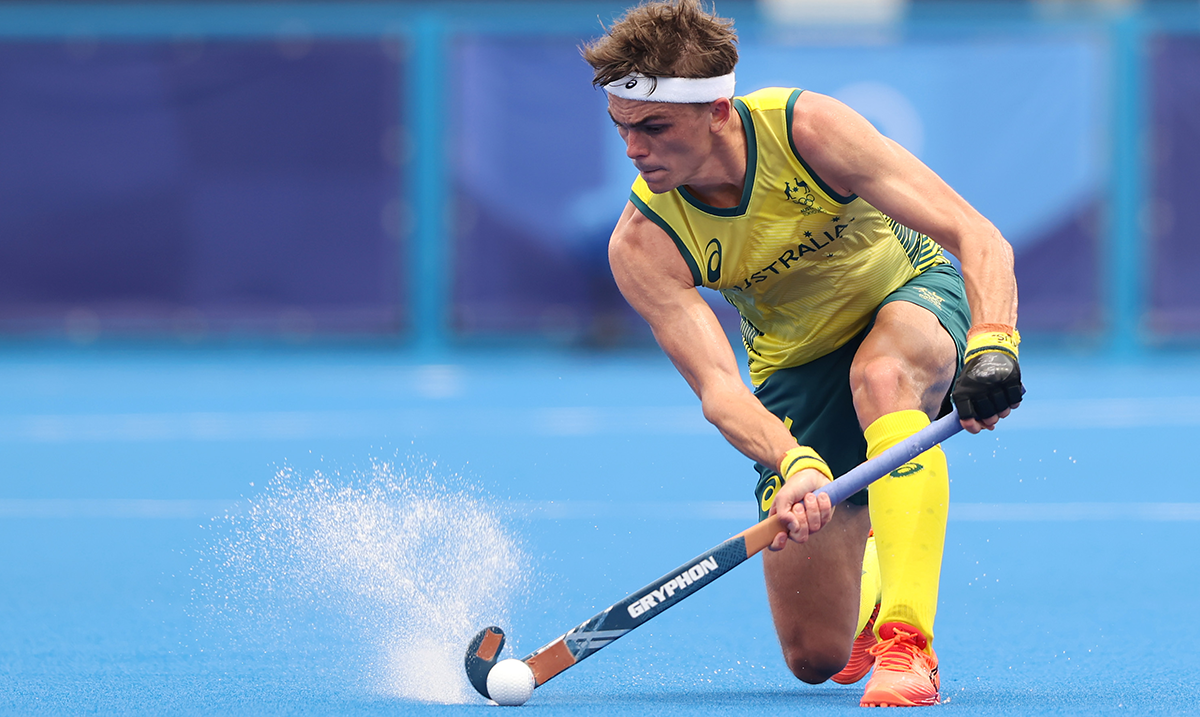 IMAGE / Tim Howard passes for a teammate against Spain.

In a match delayed by rain and lightning, the Kookaburras dominated from the opening whistle. However, exceptional goalkeeping by Spanish number one Francisco Juncosa Cortes defined the opening half.

Cortes, a 38-year-old four-time Olympian who has signalled his intention to retire after the Games, was in top form saving two shots, including a penalty corner, to keep it scoreless at the first break.

Wickham then pounced on a penalty corner opportunity in the first three minutes of the second quarter, knocking in a rebound from a Blake Govers’ drag flick to put the Aussies in front.

The Kookaburras tried to build on their lead before half-time, but Cortes proved too good by saving two penalty corners and four field shots to keep Spain in the contest at half-time.

Exceptional defence by Jeremy Hayward kept a motivated Spanish side at bay with just two circle penetrations, before he was unable to convert a penalty corner for the Kookaburras at the other end in the third quarter.

Spanish forward Marc Bolto was denied a goal in the first five minutes of the final quarter after a rebound off goalie Andrew Charter’s pads hit the foot of teammate Cadafalch Quemada.

Alejandro Alonso had three attempts from three penalty corners with just six minutes to go, but was unable to outsmart the fiery defence of front-runner Tim Brand who was making his 50th international appearance.

It was the do-or-die approach of the Spanish defence which saw them equalise from a penalty corner in the final 60 seconds – and the rest, as they say, is history.

The Kookaburras’ quarter-final opponent is still undecided, with it set to be either Great Britain, Germany or the Netherlands depending on results later today.