Tokyo 2020 Track Cyclist END_OF_DOCUMENT_TOKEN_TO_BE_REPLACED is the embodiment of an endurance athlete, not just for what she does on the bike, but for facing the devastating loss of her father, a medal-robbing crash at Rio 2016 and a heart condition that threatened to end her career.

The 25-year-old has endured everything life could throw at her.

Baker grew up in Tasmania and earned her black belt in taekwondo by the time she was nine. Along with competing in elite triathlon, swimming and local netball, she was an all-round athlete.

“My whole family was pretty sporty, so from a young age my parents encouraged us to be active, try a lot of different sports and I really developed a passion for it,” Baker said. 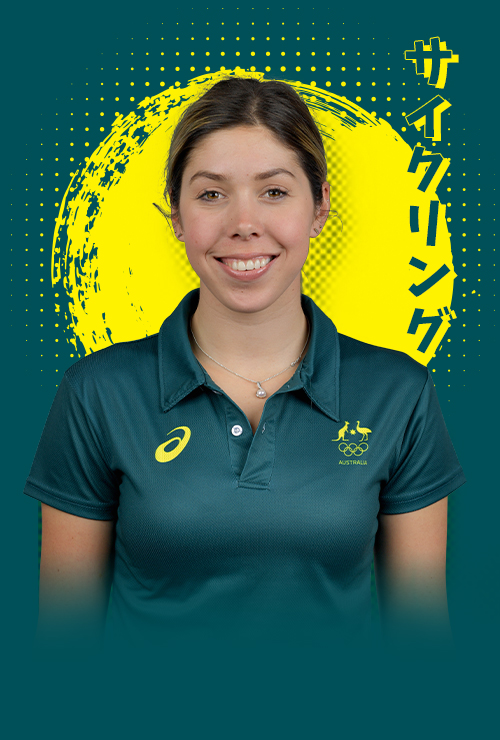 “I was a black belt in taekwondo, which surprises a lot of people. Half of my teammates don’t even believe me, so I’ve needed to get the photos out on my phone to prove it to them,” she laughed.

Her athletic prowess led to Baker being talent identified for a few different sports: cycling, basketball and rowing.

Being her favourite leg of the triathlon, cycling seemed like the best fit for the youngster and her first experience of the track proved she made the right decision.

“I went up to the velodrome in Launceston and rode the track for the very first time and have loved it ever since,” she said.

Cycling soon became a bonding activity between Baker and her dad, Patrick, who wanted to ensure she was safe on the road.

“My dad was a pretty good athlete himself, so I used to train with him a lot. He started riding with me just so I wouldn’t be riding the roads of Tasmania by myself.”

With her dad by her side, Baker became a multiple junior world titleholder, but in 2015, tragedy struck for the Baker family when Patrick suddenly passed away of a massive heart attack.

Baker understandably refers to it as the worst time of her life.

This photo speaks 1000 words...and is one of the best memories I have with my dad. I love you and miss you more than you will ever know. ❤️ #foreverandalways #dadsgirl #myhero #prouddad #1year #familyiseverything

“It affected me a lot and it still does,” she shared. “But the most important thing he instilled in me, was to be strong.

“Dad was the one that taught me the importance of self-belief. He pushed me, he believed in me and whenever I ride my bike, I always think of him,” she shared.

“He just loved life; I remember him always being really happy. He’d never hold a grudge and he’d make the most of every opportunity.

“When things get really tough, I just think about how my dad would cope in the same situation.”

While navigating the grief of losing her ‘best friend’ and ‘biggest supporter,’ the surprising prospect of an Olympic debut came knocking on Baker’s door.

“Straight after my dad passed away, I was given an opportunity to go on a camp ahead of the Rio Olympics. Prior to that, I wasn’t even in the picture for Rio,” she explained.

“After that, everything was a bit of a whirlwind.”

Baker made her debut at Rio 2016, alongside Melissa Hoskins, Annette Edmondson, Amy Cure and Ashlee Ankudinoff in the Team Pursuit.

The Aussie women were hot favourites to dominate the podium, after finishing 2015 as the World Champions and World Record holders, but a freak crash during training left four of the team injured, two days out from competition. 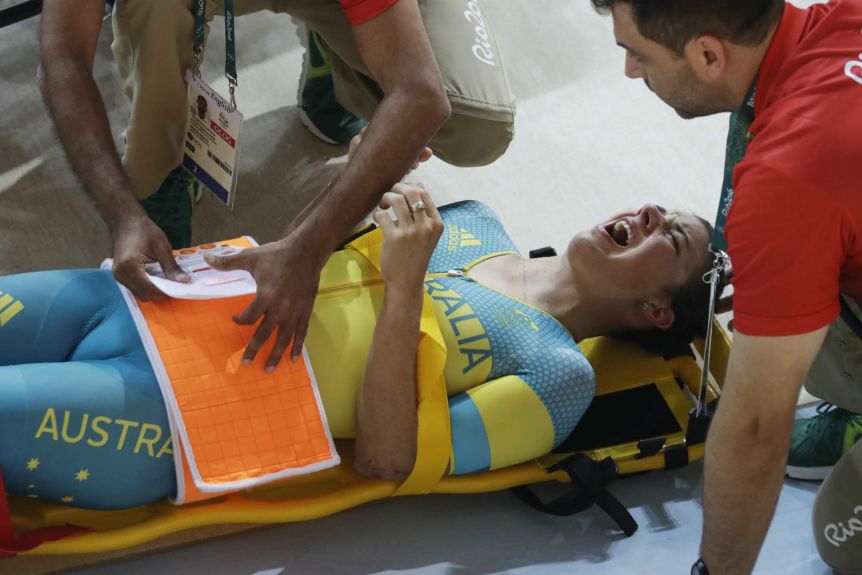 Hoskins was taken to hospital by ambulance, while Ankudinoff suffered a subluxation of the AC joint in her shoulder, and Baker and Cure had severe bruising and track burns. Edmondson was the only team member who managed to escape unscathed.

“The crash definitely did impact our performance,” Baker said. “After the crash, we had girls on crutches being carried and physically placed onto their bikes to compete.

“It showed a lot of courage to be able to do that because there were so many injuries.”

Despite their disadvantage, the team put in a gallant effort, but the effects of their injuries sent the gold medal favourites to fifth place.

Coming home and dealing with the grief of losing her dad, along with having her Olympic aspirations come crashing down hit like a truck for Baker.

And just like that our Olympic Campaign is over. Although we didn't have the result we were after, it was a dream come true to be on the start line next to these amazing girls. A huuuge thanks to my family, friends and teammates who have been there every step of the way. To everyone who has sent me messages your support has been overwhelming. #thankyou 😙😊 📸 @gettysport

“Coming home from Rio was very tough. I struggled a lot because I’d lost my dad the year prior and didn’t have time to properly process that because everything [being selected for Rio 2016] happened so fast,” she explained.

“I achieved my dream of going to an Olympics, then for the crash to have happened, and for it to have pretty much been my fault for hitting the wheel in front of me, was a lot to deal with.

“It was overwhelming and took me about a year to get over it,” she continued.

“It wasn’t until the following year when I missed out on the world championships that I said to myself, ‘come on Georgia, you need to pull yourself together, there’s another Olympics in three years.’

“Missing out on that world championships team was the turning point for me, I hated it and that’s when Tokyo 2020 became the focus.”

It's been a while... but I'm keen to start racing tomorrow at the #oceaniachamps with these chicky babes + @alexandramanly. 😎👌 #tp #oceanias #squadisback

Although she had already faced her fair share of setbacks, the blows kept coming for Baker and in June of 2017 she was diagnosed with a heart condition.

“I was overseas racing for the professional women’s team in the London women’s tour and my heart rate became really high, I thought I was having a heart attack,” she said.

“Given what had happened to my dad, they took it very seriously. They ran some tests and eventually I was diagnosed with Supraventricular Tachycardia (SVT) and I needed to have surgery.

SVT is an abnormally fast heart rhythm caused by an overactive nerve in the upper part of the heart. For Baker, it sat in the junction of her heart.

“It is a hereditary condition. My mum doesn’t have it so it’s assumed that my dad would have had it,” Baker explained.

“My sister also has SVT and needed to have surgery too and when I have kids, they will most likely have it as well.”

So happy & relieved that my heart surgery was successful! After a week of rest I'll be back on my bike and on track for the season ahead! ❤️

After surgery, Baker was told her time on the bike was limited.

It was a devastating blow for the then 22-year-old, who was just getting back on her feet.

“After surgery, I had a specialist tell me I wouldn’t be able to ride beyond 2020, which was really hard and confronting,” she said.

“They told me I had scarring on my heart which was a combination of both what I’d been doing [cycling] and the SVT, so I wouldn’t have very long left of my cycling career.”

It made Baker’s drive towards for Tokyo 2020 come with a sense of urgency, as it could well have been her last Olympic Games.

With no time to waste, two weeks after her surgery, Baker was back on her bike and within a year, won gold in the Team Pursuit at the Gold Coast 2018 Commonwealth Games.

In 2019, she teamed up with Ashlee Ankudinoff, Alexandra Manly, Amy Cure and Annette Edmondson to win world championship gold in the Team Pursuit and silver in the Madison and finished the 2019-20 World Cup season with three Madison gold medals and Team Pursuit gold and silver. 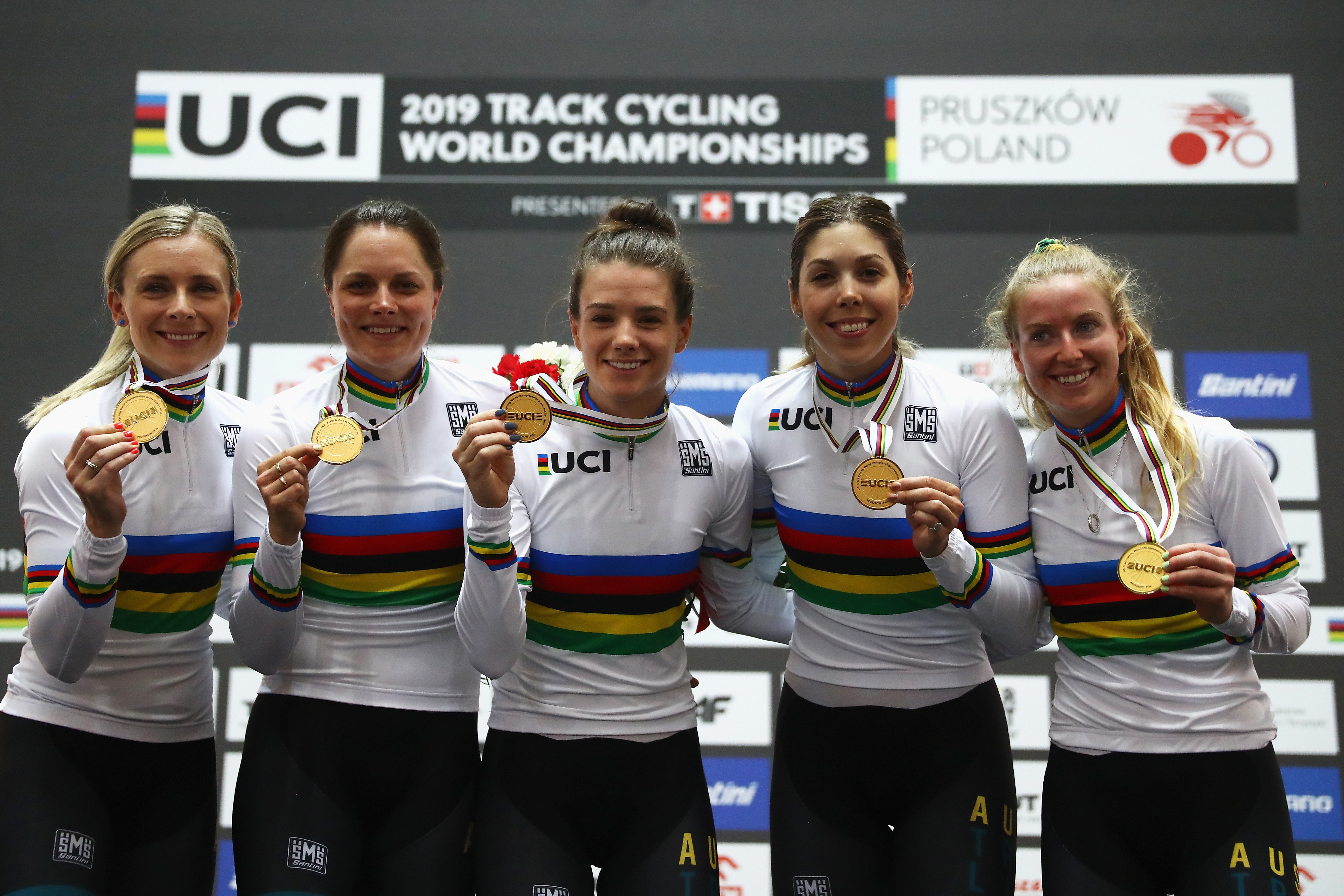 Currently, Baker is well on-track for success at her second Olympic Games in July, which, in a well-deserved and fortuitous turn of events, won’t be her last after all.

“Cycling Australia encouraged me to get more tests done recently and those results were a lot more positive,” Baker explained.

“The specialists told me that although my heart still drops a beat occasionally, that is quite normal for athletes.

“They said the worst thing that could happen from me continuing to ride would be another SVT, but the likelihood of that happening is really low and it’s not life-threatening.

“Now, I can ride my bike for as long as I want, it’s just something I will need to continue monitoring and testing every year.”

With a long and bright cycling future ahead of her, Baker’s goal for Tokyo 2020 and beyond is simple: golden redemption.

“Our biggest goal as a team, is Olympic gold and we’ve been preparing for nothing less than that,” she said.

“We’ve been training so hard to stand on the top of that dais and that’s exactly what we will be striving for.”