When Helsinki hosted the 1952 Olympics, Finland reigned as one of the leading powers in athletics. It was to everyone’s delight that its greatest Olympian, the Flying Finn Paavo Nurmi, a winner of nine gold medals, was chosen to light the Olympic flame alongside fellow athlete Hannes Kolehmainen. This was an exciting Olympics, with a record number of nations (69) and events (149), and quality competition across the sports.

While the United States again led the medal table with 40 gold medals, the biggest story was the debut of the Soviet Union (there had been a Russian team at the Olympics up to 1912). The USSR won 22 gold to be second on the medal table, giving an indication of their strength in such sports as gymnastics, weightlifting and wrestling.

The star of the Games was Czech runner Emil Zatopek. He completed a treble that is unlikely ever to be repeated at an Olympics, winning the 5000m, 10,000m and marathon. As well, his wife Dana won a gold medal in the javelin, cementing their standing as their nation’s golden couple. However, Australia’s own Marjorie Jackson, known as ‘the Lithgow Flash’, stole some of the athletics spotlight with her sensational sprint double, winning the 100m and 200m.

A notable champion was Hungarian shooter Karoly Takacs, who won the rapid fire pistol event. Before World War II, Takacs, a right-hander, had been one of Europe’s finest shooters. But his right hand was completely shattered in a grenade explosion in 1938. Determined to continue competing, he taught himself to shoot left-handed, leading to his Olympic victory.

Australia at these Games 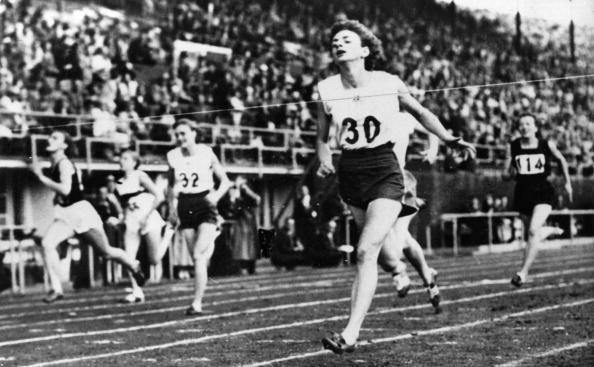 Australia sent a team of 85 athletes to Helsinki, including 10 women. While the medal tally of 11 was two less than in London four years earlier, it was remarkable because it included a record gold medal haul of six. Athletics provided three of the gold, cycling two and swimming one.

The gold medallists for Australia were “the Lithgow Flash” Marjorie Jackson, heralded champion of the 100m and 200m sprint double; Shirley Strickland in the 80m hurdles; swimmer John Davies in the 200m breaststroke; and twin cycling successes for Russell Mockridge in the 1000m time trial and with Lionel Cox in the 2000m tandem race.

With Jackson and Strickland at the forefront, Helsinki welcomed in the golden era of Australian women’s athletics. Their success would peak in Melbourne in four years time, but triumphs in the three individual women’s track events at the Games was a remarkable achievement. As well, Strickland won the bronze medal in the 100m. It could have been even better – Jackson dropped the baton on the last exchange from Winsome Cripps in the 4x100m relay with Australia well ahead.

Mockridge pedalled his way to greatness in Helsinki, emerging as the world’s premier amateur cyclist. His two gold medals were won on the same afternoon, an indication of his strength and stamina. Sadly, he was killed in a road accident while cycling in 1958 at the age of 30.

Rower Merv Wood, a 1948 gold medallist, carried the Australian flag in the Opening Ceremony. He later won a silver medal in the single scull. The men’s eight earned the bronze medal at the regatta, Australia’s first rowing medal in a crew (non-individual) event. Vern Barberis picked up Australia’s first ever weightlifting medal, winning bronze in the lightweight division.