Anna Meares: Claiming the one title that trumped them all - 'Mum.'

A track cyclist with six Olympic medals to her name and a history-making comeback story, Anna Meares is one of Australia’s most beloved sporting heroes.

She boasts the titles of dual Olympic Champion, 11-time World Champion and five-time Commonwealth Games gold medallist, but she never thought she would claim the title ‘mum,’ until the recent birth of her daughter, Evelyn.

‘Better than any medal or title I have ever won, The day that I became a mum’ @nick_flyger and I are thrilled to share the safe arrival of our daughter Evelyn Bette Meares Flyger. Born 1207am 10/02/2020 weighing 3.39kg. #SheIsJustPerfect ❤️

The Rio 2016 Australian Flag Bearer retired in 2017 as Australia’s first Olympian to have medalled at four Olympic Games. At the time, Meares was 32 and recently divorced, but being a mum had been a lifelong dream of hers.

“One of my first coaches, Marv [Martin Barras] would always joke that I had my kid’s names already on the doors,” she said.

“I’d always wanted to experience being a mum, but eventually like anything in life, with time and age, I thought that door had closed.”

Believing she wouldn’t be able to have a child of her own, she channelled her maternal longings into foster care.

“I figured that I’d just be a single person forever, with a big block of land who would take in foster kids and rescue beagles,” Meares laughed.

In 2017, she reconnected with her now partner, Nick Flyger, who took over the role of the National Senior Track Sprint Cycling Coach after the death of Meares’ much-loved coach, Garry West.

Flyger supported Meares through her grief, and the two formed a friendship that blossomed into romance. Flyger encouraged Meares to find her passion outside of sport and that’s when the idea of fostering children was born.

“One thing Nick and I would talk about a lot when we first started seeing each other was around me trying to find my place of contentment in life after sport,” Meares explained.

“There were a lot of coulds, shoulds and woulds but he simply said to me ‘don’t do what you think everyone wants you to do, do what is going to feed your soul,’ and it took me a while to figure it out.

“Kids and family were a big one for me, but adoption wasn’t an option at the time and even today is really difficult in this country.

A friend of mine steered me towards a foster care information session and I saw that as an opportunity to positively impact a child’s life and also, to fulfill that maternal side of myself,” she shared.

Meares registered to become a foster carer and cared for children between the ages of four and eight years old, then in September of 2019 Meares and Flyger announced she was pregnant with their first child.

We are very thankful for and overwhelmed by the kindness, joy and love expressed in response to my partner @Nick_flyger and I sharing our happy news with the world via @reece_homfray & the @tisersport 🙏🏻 link in bio #babyonboard #plus1 #family #Feb2020 📷Matt Loxton

“When I first thought I was pregnant, I didn’t actually say anything to Nick. I just kept it in the back of my mind,” Meares said.

“I’d always imagined what that moment would be like when you see that ‘positive’ test.

“I’d assumed that I’d be an emotional wreck but I was just so elated and so happy, but at the same time wasn’t able to comprehend the reality of it, even though it’s what I’d always wanted,” she shared.

“It’s kind of like, you always dream of winning an Olympic gold medal, but no one tells you what it feels like when you actually do, and so I had this dream that I wanted [of becoming a mum] and I wasn’t sure if I’d achieve it, but the moment it became a reality, I almost didn’t know what to do.”

Meares shared her joy on social media calling the birth of her first child, “Better than any medal or title I have ever won. The day that I became a mum.”

Resilience and success against all odds are qualities Meares has been known for throughout her decorated career.

At Athens 2004, she became Australia’s first ever female Olympic gold medallist in track cycling, winning the 500m Time Trial. But in 2007, just seven months out from her second Olympic Games, she sustained a horrific injury while racing in Los Angeles.

I go to sleep tonight knowing I've come along way, learnt a lot and achieved a great deal since this life altering moment 8 years ago. A moment that made me vulnerable but also a moment that gave me gratitude for what I do and who I am thankful to have in my life.

Meares broke her neck and left hospital in a neck brace and a wheelchair. Even her father Tony said he didn’t give her ‘a hope in Hades’ of making it to Beijing 2008.

“Before I hit the track, all that was going through my head was, ‘Marv is going to be so angry,’” Meares recalled.

“That was one discussion we had right before the race, that the Games were only seven months away and the last thing we needed were any injuries, but then I hit the track and was knocked out. When I woke up, I was just gutted,” she said.

“I was so focused on Beijing and qualification, that was my whole reason for being in LA in the first place and I was scared because I didn’t know what a broken neck meant, I didn’t know the ramifications so your mind just races.

“Once I got the information that I’d broken my C2 and I’d need 10 weeks in a brace and a wheelchair, I was devastated because I thought my Beijing dream had gone out the window,” she continued.

She was later informed that if the break had been just 2mm longer, she could have ended up a quadriplegic or the crash could have been fatal.

“The C2 level where I fractured is where all the lung attachments go through, so I was two millimetres from, at best case scenario, requiring a respirator for the rest of my life and being paralysed, or worst case scenario, dead,” Meares said.

Knowing she was so close to a different outcome changed Meares’s perspective on life.

Love this. Thanks @santinisms #santini

“That experience taught me that the way you look at a situation changes the potential path you go down,” she explained.

“I did the math and said, ‘well, 10 weeks of recovery and seven months to get to the start line… I’ve got four and a half months once this brace comes off to get to Beijing’.”

Against all odds, the resilient Queenslander not only made it to Beijing 2008, she won a silver medal in the Sprint before going on to claim Sprint gold and Team Sprint bronze at London 2012.

Meares also won Keirin bronze at her final Games, after leading the Australian Team as Flag Bearer at Rio 2016. 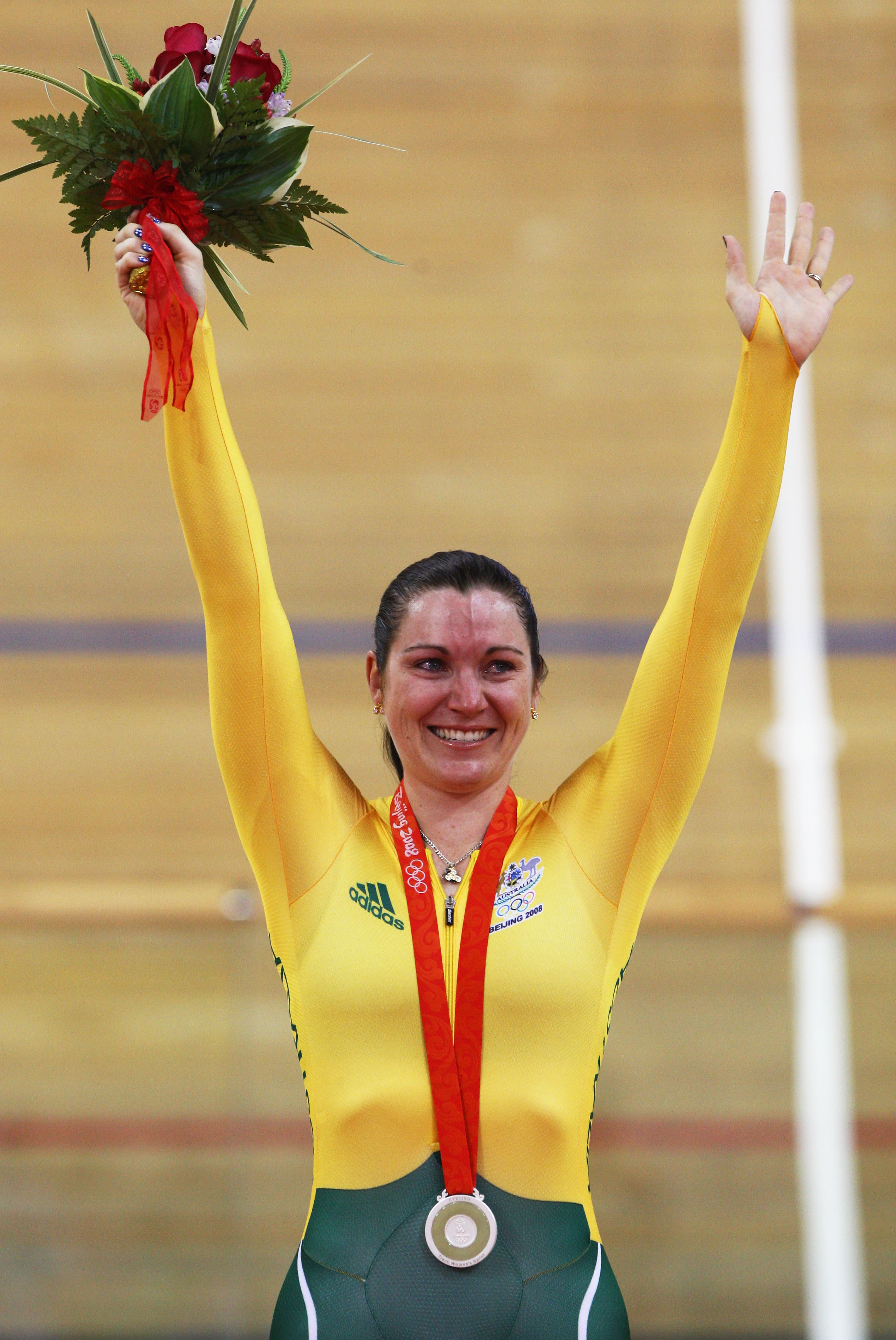 “It wasn’t easy, and the trouble is, physical injuries always come with emotional and mental injuries,” she explained.

“The rollercoaster was always up and down… ‘I can do it, I can’t do it,’ multiple times a day, but I’m pretty stubborn when I want something.

“My sports psych always says that I’m persistent, which is probably a better way to describe it.”

But Meares says the trials and tribulations she endured throughout her life and career revealed who she truly is and has helped shape her into the mother she is today.

“One thing I’ve learned about myself is that I’m more capable than I even realised,” she shared.

“I’ve learned that I can’t always do it on my own, and to be able to ask for help and swallow my pride and ego in that sense.

“Life isn’t always going to be perfect, it’s not always about winning and succeeding, and when you have those dark moments that you have to trudge through, you need to be open to help.

“I’ve been very lucky to have a great family, friends and manager who have always been there in my corner, but as humans we’re always harsh and judgemental when it comes to critiquing ourselves.

“I hope that I will be able to teach my daughter the importance of empathy for both herself and others as she grows.

Time to go home... and... I upheld my bet with Nick . Ev came home in the black and white watched closely of course by the #boxingkangaroo

“I think because I’ve had such a full experience of life so far, I have the ability to be able to sit in the position of being Ev’s mum and give her the time that she needs.

“I just want to give her a lot of opportunity to express herself, to find her passion and follow a path that speaks to her… Not to me, not to her dad or anyone else, just to her and I think that will allow her to want to work hard and dedicate herself.”

As for the legacy Anna Meares wants to leave on a wider scale, her answer is simple.

“I’ve always said, just to be remembered at all would be nice, because that means I’ve done enough to connect with people enough to stay in their psyches,” she said.

“I hope to be remembered as a fighter, someone who worked hard but was real.”

You can read all about Anna's journey in her new book, 'Now'. Order online END_OF_DOCUMENT_TOKEN_TO_BE_REPLACED