Victorian, Doris Jessie Carter went to the 1936 Berlin Olympic Games with Australian form that suggested she was a medal hope in the women’s high jump.

The Germans thought likewise. In the event, injury precluded her performing at her best, but by finishing equal sixth she became the first Australian woman to reach an Olympic track and field final.

The gold medal-winning height of Hungary’s Ibolya Csák was lower than Carter’s Australian record. Also finishing equal sixth was a young Dutchwoman Fanny Koen who, twelve years later and now Fanny Blankers-Koen, was the star of the London Olympics, with four gold medals.

Whilst in Berlin, Carter noticed the burgeoning German militarism. A multi-talented sportswoman, she was also an Australian discus champion and a skilled hurdler and was selected in the Australian women’s hockey team to tour Engand in 1939.

Unfortunately, she was unable to obtain the necessary leave from her teaching job to again travel overseas, and thus she withdrew from the team. Ultimately, the impending war caused the cancellation of the tour.

In 1942, Carter joined the Women’s Australian Auxillary Air Force. Half a century later, she said of that decision ‘it was just the thing to do then … we were very busy … but everyone thought it was their duty’. 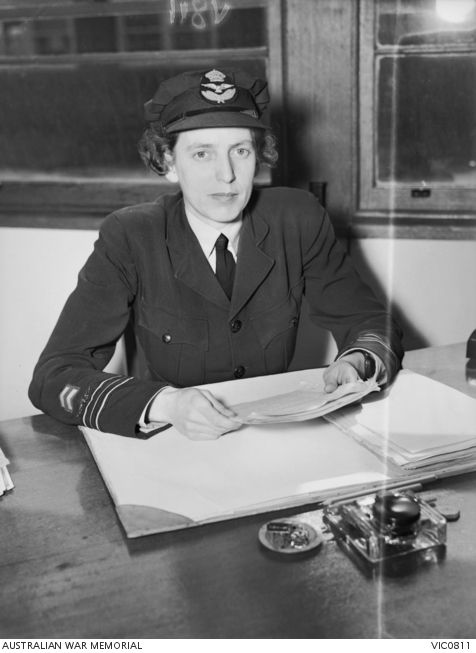 Squadron Officer Carter was a member of the Australian Victory Contingent that visited England and Germany in 1946. When visiting Berlin she observed the war-ravaged Olympic precinct. In 1951, now Wing Officer Carter was appointed the first Director of the Women’s Royal Australian Air Force (WRAAF). She received a Queen’s Coronation Medal in 1953.

Doris Carter’s service to the Australian Olympic Movement continued in 1956 when she was one of the two female members of the Organising Committee for the Melbourne Olympic Games. At the Olympics, she was manager of the Australian women’s team.

A year later, ‘in recognition of her outstanding leadership and tireless service to the WRAAF’, she was created Officer of the Military Division of the Most Excellent Order of the British Empire (OBE).

In another first, she became the first woman to lead the Melbourne Anzac Day march when she shared the role in 1996 with Air Commodore Keith Parsons.