Rechelle Hawkes: A golden retirement for the world's most successful Olympic hockey player

Born in Wundowie, a small country town in Western Australia, Hawkes first picked up a hockey stick at the age of six, following in the footsteps of her mother, Dorothy, who formed the hockey club.

Growing up in a small town meant that the closest hockey competition was hundreds of kilometres away but determined to ensure Rechelle and her sister Keran could play, Dorothy started a local club with the help of farmers who built the grounds.

When she was 15, Hawkes’ family moved to Perth and that’s when she began to take the game a bit more seriously. 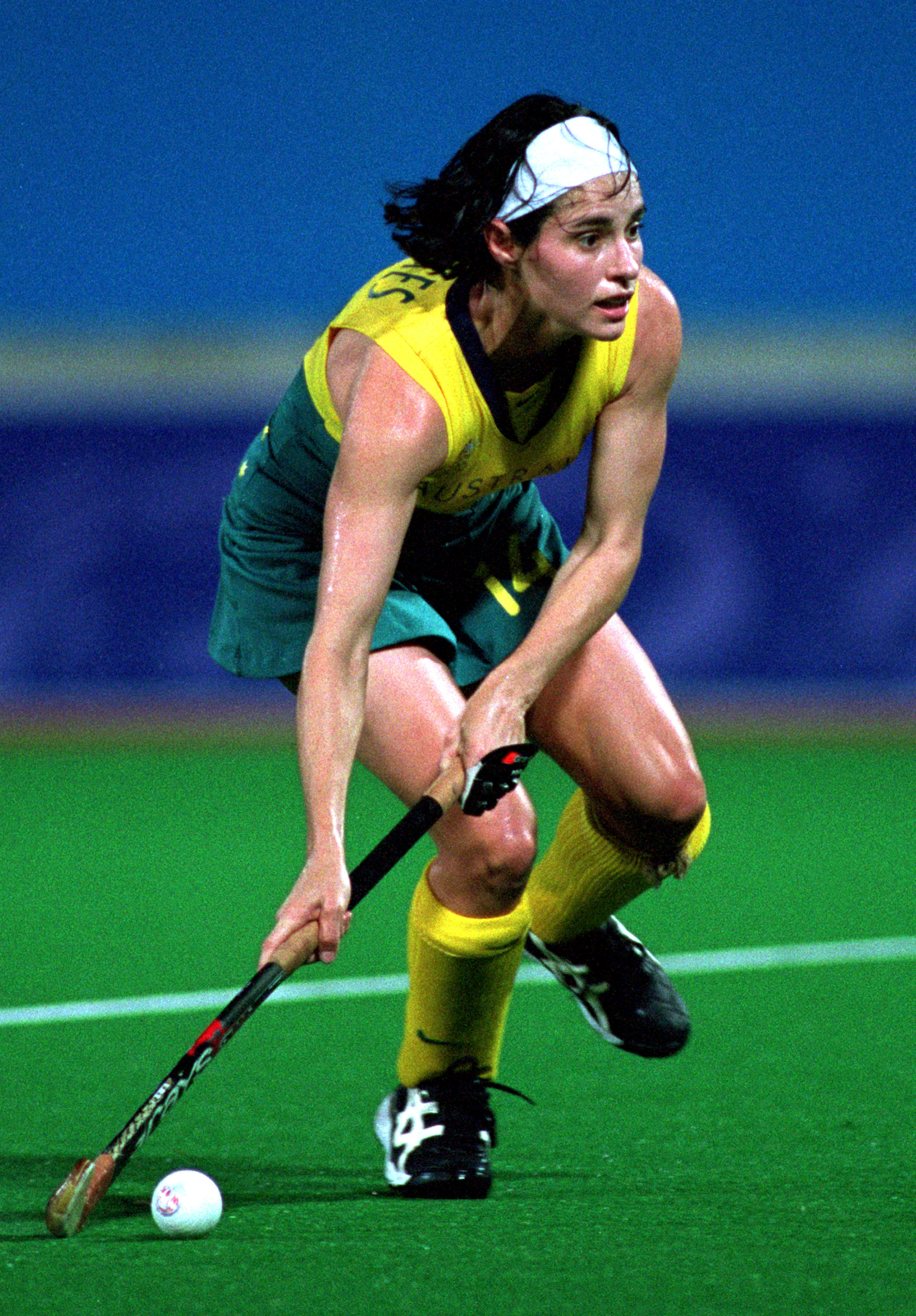 When she was 18, much to her surprise, Hawkes made her Australian Team debut after catching the eye of selectors at the National under-21s tournament in 1985.

“I’d decided from that young age of six that I wanted to represent Australia and when I was 18, I got the call up,” Hawkes explained.

“It was a bit of a whirlwind because I hadn't played hockey at a senior level in Western Australia, I was elevated into the national side which was a bit of a shock to the system.

"I’d always had aspirations, but it probably came a bit sooner than I thought!

“I remember being very nervous when I made my debut, it was in a test series against Germany and I went in with a bit of trepidation, wondering how I was going to perform but I was also just as excited,” she continued.

“To be able to say that you've represented your country at the senior level against one of the powerhouses at the time, was very exciting.”

As she progressed, Hawkes became not only a regular, but a leader and a legend in the Hockeyroos team.

She was named Captain in 1993, a title she held for eight years and over her career she led her team to gold at three Olympics, won two World Cups, five Championship Trophies and a Commonwealth Games title making her the most successful woman to ever play the game. 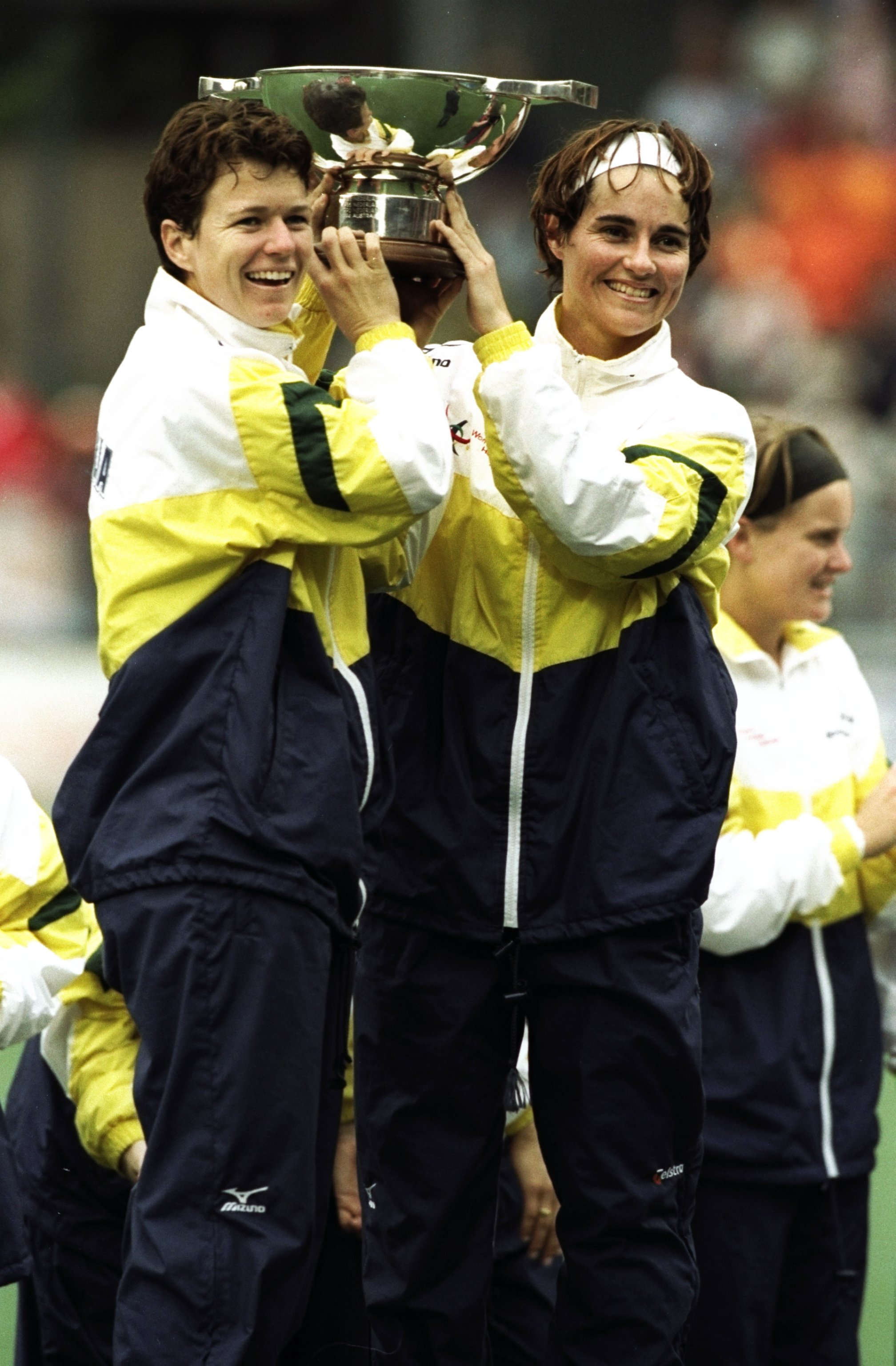 But Hawkes didn’t seek out leadership, in fact, she was quite the introvert.

“My leadership skills were unearthed as I progressed through my career, so I did have to grow into the role,” she explained.

“There were strengths and certainly weaknesses that I had, and one weakness was that I was pretty shy and introverted.

“I don't like big crowds or being front and centre and that was something that I really worked hard at. I forced myself to overcome the shyness and the fear of speaking in front of people.”

She said that due to her reserved nature her leadership style was one that was laid back and led by example.

“Off the field, I was pretty quiet, pretty reserved, I wouldn’t say a lot, but when I did say something, I hoped it would be impactful and have meaning," Hawkes said.

“As a leader I was very much about getting on the front foot and showing the team the way, hoping they'd come along with me.

“As the saying goes, lead by example, put your best foot forward, show your commitment on the field and your character when things aren't going well.

“Being able to lift the team and forge a path for everyone else to follow would sum up how I wanted to lead."

Hawkes made her Olympic debut as a 21-year-old at Seoul 1988 where the Hockeyroos won their first gold medal. She was the youngest member of the team who finished fifth.

She then played at Barcelona 1992, scoring a goal in the preliminary rounds before being named Captain the following year. 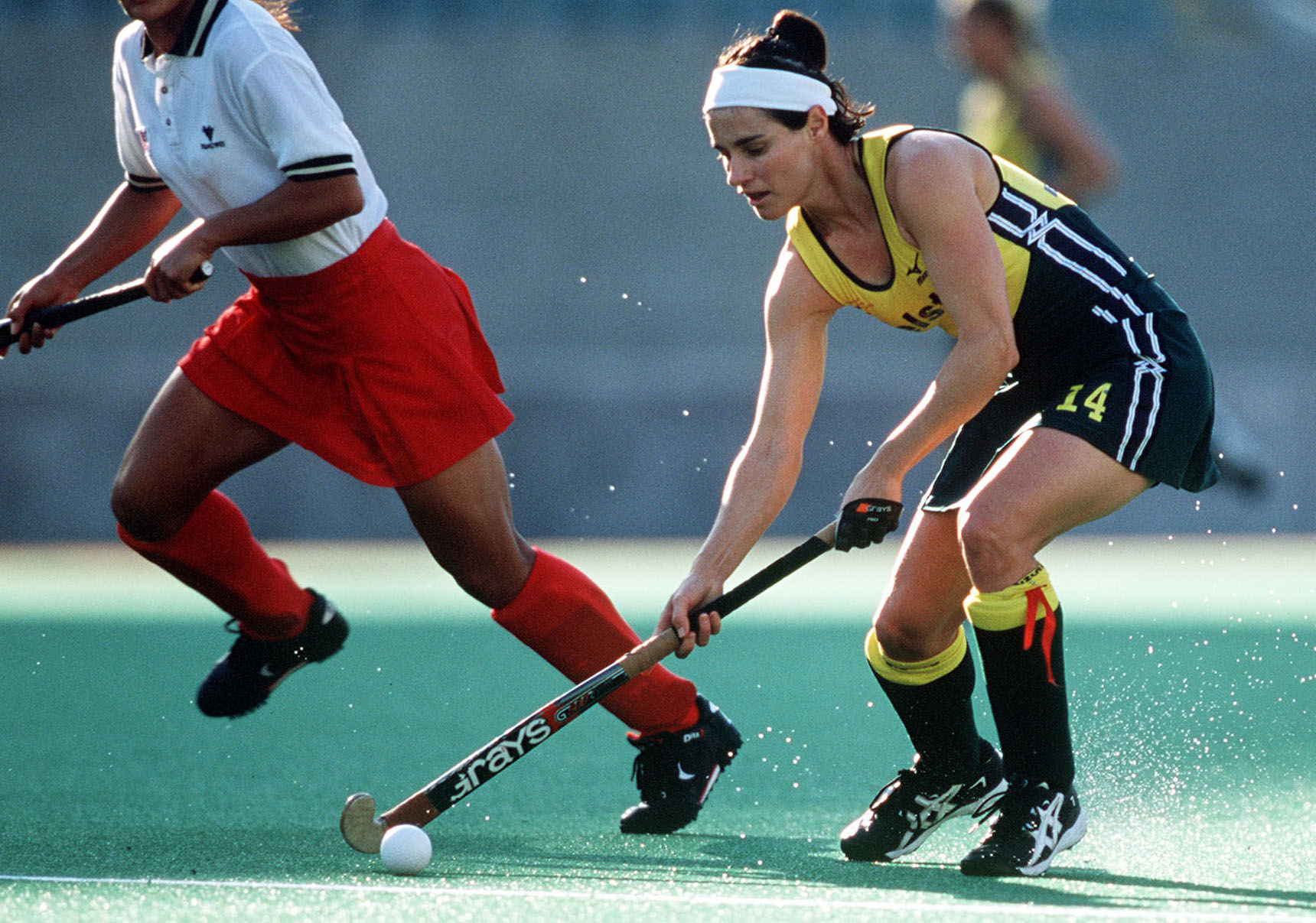 Many refer to the years under Hawkes’ leadership as the beginning of a golden era for the Hockeyroos and Hawkes credits this to the depth, resilience, leadership and adaptability of the group.

“Our success as a team was due to a combination of things, but certainly having depth is really important,” she explained.

“We had a large squad of 25 to 28 players over the journey from 1993 to 2000, so having that depth within the squad created competitiveness, which then translated into everyone always trying their very best because they knew there would be someone else trying to take their spot.

“We also had a core group of about eight to 10 players that competed from the early '90s through to Sydney 2000 and they led the way in terms of leadership roles, bringing younger members along and mentoring them in terms of setting standard and knowing what the expectations were when performing at the highest level.

“There was always an understanding of high-performance teams, what made them tick and what was required to get to that next level.

“We also had a coach that was very innovative and a bit different,” Hawkes continued.

“He expected excellence from everyone all the time and would bring in other supporting coaches that had skills that he didn't have, so they were able to compliment him, but, most importantly, we had a really tough group that were very resilient.

“The personalities within the group were tough characters who were able to overcome obstacles and I think this was one of the reasons why the team did very well during that period.

“One other big factor was our playing style which we’d adapt to suit the opposition, the flexibility of that system really held us in good stead against the best teams in the world.”

The Hockeyroos competed at Atlanta 1996 under Hawkes’ leadership and won gold, then at Sydney 2000, Hawkes was honoured with reading out the Athlete’s Oath.

“Being asked to read the Athlete’s Oath was such a surprise," she said.

"I hadn’t even considered it because the journey I was on, was all about playing for the team so anything else that came my way was an added bonus.

“I remember vividly, it was the day prior to the flag-raising ceremony and the manager came to see me and asked if I could go out and see John Coates, who was the Chef de Mission.

“I walked up there and wasn't quite sure what I was going to be asked, but then he delivered the message that Andrew Gaze would be the flagbearer and he would like me to read the Athlete’s Oath.

‘I was very excited, it was pretty special moment and very nerve-wracking, but it was a really nice thing to be able to do, to stand in front of all the athletes and represent them in terms of committing to this oath and doing the right thing.

“It's was just lovely and touching and was great to be able to deliver it at a home Games.”

On the field, the Hockeyroos dominated throughout the competition. 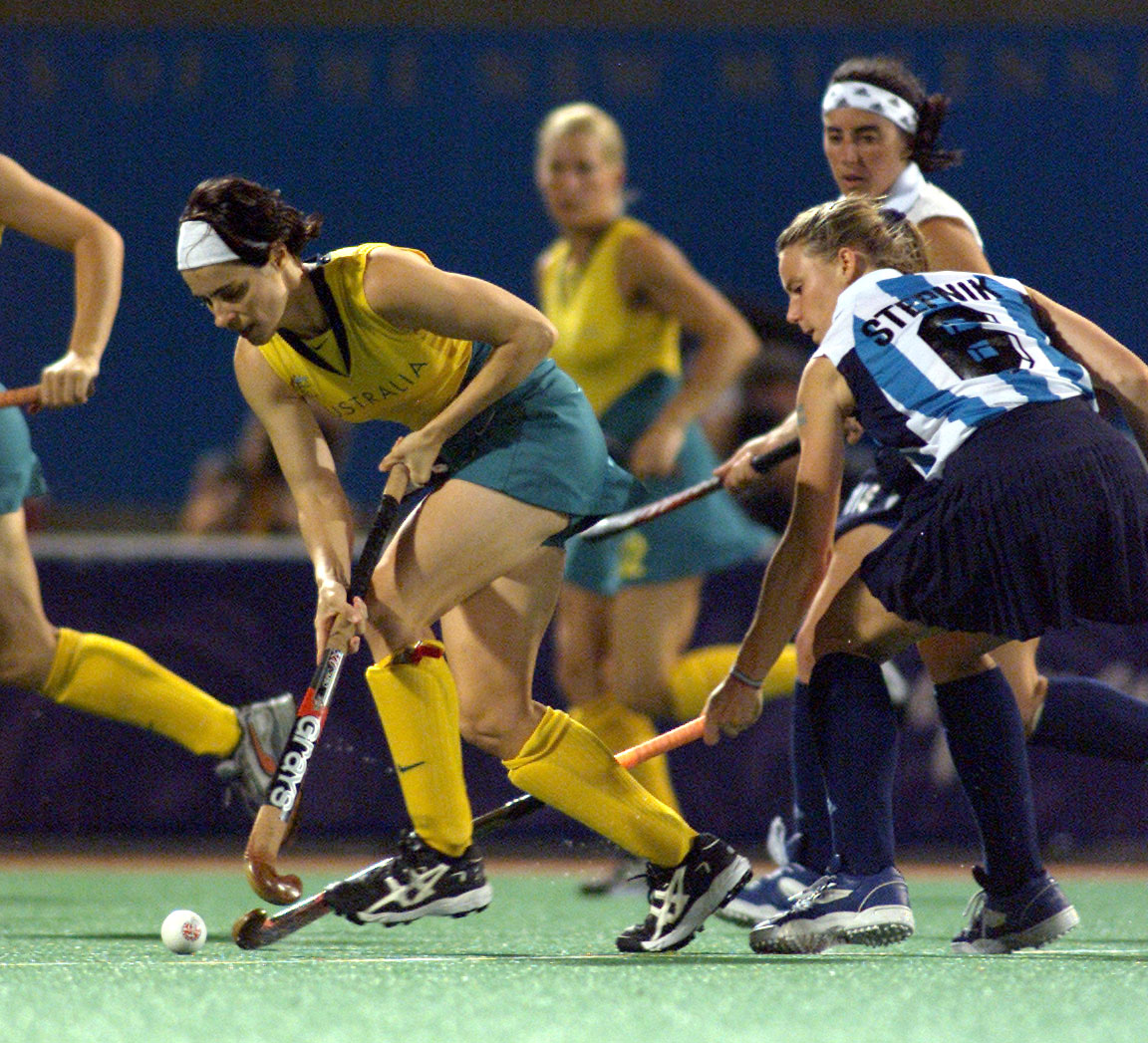 Now 33 years-old, a four-time Olympian and Captain of the team for eight years, fans expected to see Hawkes lead the team to Olympic gold on home soil in a fitting farewell, but, controversially, she was not selected as Captain.

At the time, Head Coach, Richard Charlesworth, was implementing a method where several players would get the opportunity to captain the team.

“I didn't mind the approach where we would have everyone step up and become leaders,” Hawkes said.

“It was just difficult to take the news because, individually or personally you think you're doing okay, but there might be another view.

“Whilst it was tricky and challenging, I didn't really let it worry me too much from a competitive perspective, but certainly, going into the Olympic final in Sydney and knowing it was the last game I was ever going to play, did impact me,” she shared.

“I remember feeling upset about it, I got on with it but emotionally it did have a bit of an effect.

“At the end of the day, I just tried to rise above it and perform on the day with my team, because that's what we were there for.

“In the end, it all worked out, we got that gold medal and the rest is history because it was always the Hockeyroos that won gold not the Captain or a particular individual.”

When the team claimed their third gold medal, Hawkes famously tossed her stick into the crowd exclaiming, “It’s time to go, I just don’t want to train anymore,” and that was her simple retirement announcement.

“It was 16 years of traveling on the road, doing the tough yards, being away from family and friends, so it was just time, and what a perfect way to go out, at a home Olympic Games,” she said. 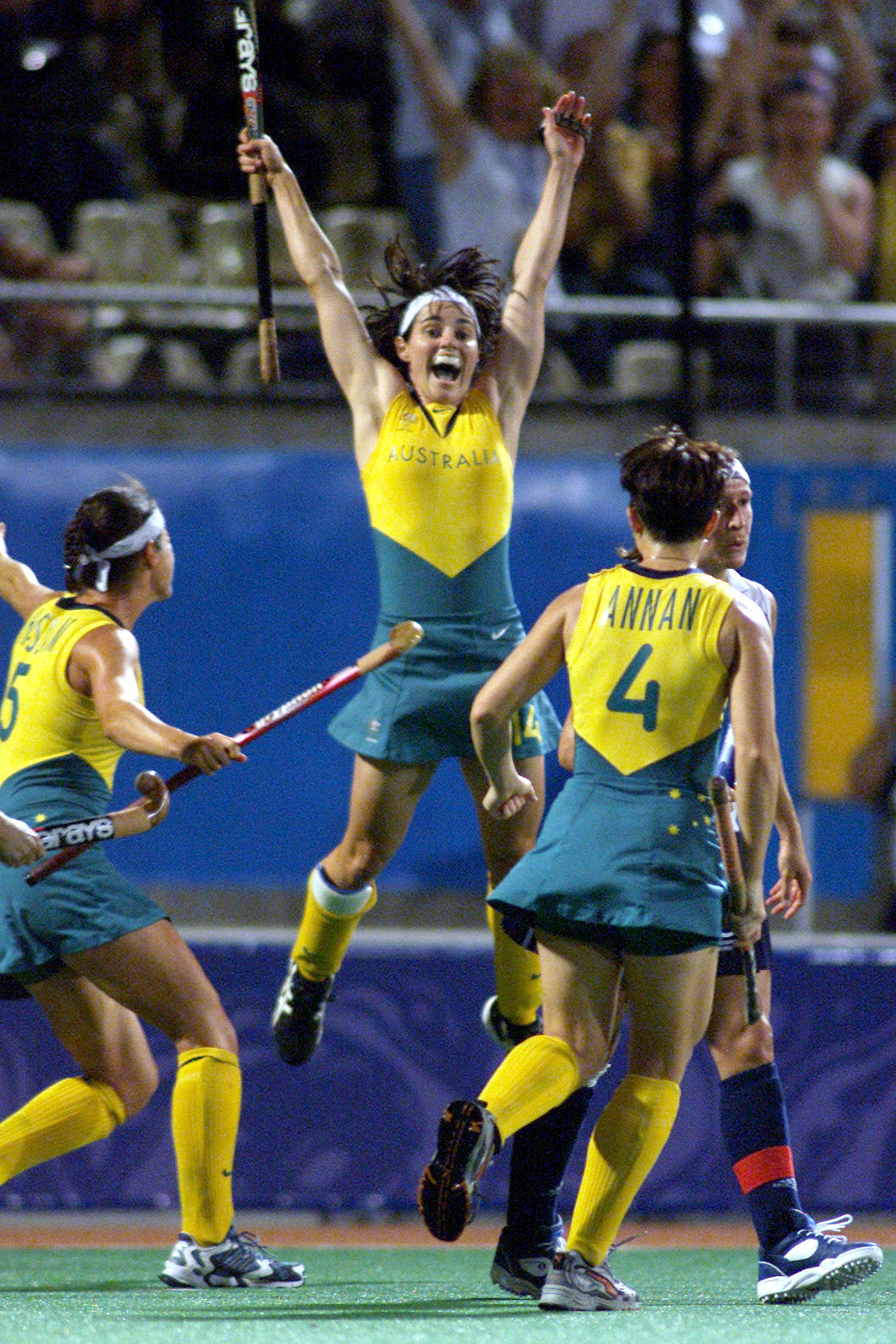 “When I announced my retirement that day, I felt a mix of relief, sadness, excitement and exhilaration knowing that I was going to enjoy this time with the rest of the team.

“It was really nice to be able to win the gold and finish on a high because not many athletes get to go out on their terms.

“The camaraderie, the journey I had with a great bunch of girls, playing together at the highest level and challenging yourself playing against some of the best players in the world are my fondest memories.

“It was a nice way to go into retirement, knowing that we would be bonded for life over that performance,” she continued.

“Success is a wonderful thing, you enjoy your time so much more when you're successful, and we certainly did and as a team.

“We will always have a bond that stands the test of time.”