Three Aussie crews were in action on the penultimate day of the Tokyo 2020 canoe sprint competition with the men's K4 500m progressing straight through to Saturday's semi-final after a second place in the heat and the women's K4 500m advancing via the quarterfinal. Australia's women's C2 500m will be in Saturday's Final B.

All eyes were on the big boats at Sea Forest Waterway with the kayak fours joining the Olympic action on Friday and Australia’s men’s K4 kicking off their Olympic campaign in style and progressing straight through to Saturday’s semi-final with a second place in the heat.

The crew around London 2012 gold medallist Murray Stewart and Rio 2016 bronze medallist Lachlan Tame put down a time of 1:22.662 with only +0.772 seconds separating them from the current World Champions from Germany in first.

It was the first race for Stewart and Tame this week, with their team mates Riley Fitzsimmons and Jordan Wood, contesting the men’s K2 1000 over the last two days and finishing 13th.  In the same event, Australia’s team youngsters and Games debutants Jean van der Westhuyzen and Tom Green won gold on Friday.

“Our heat was awesome, yesterday was obviously a bittersweet day for Woody (Jordan Wood) and myself, unfortunately it didn’t go to plan for us and we were really gutted and pretty upset by that, so we wanted to come out here and put our best paddle forward and put in a good heat,” dual Olympian Riley Fitzsimmons said.

“We will look at the data and assess where we can improve and hopefully pip the Germans later on tomorrow.  It is time to reset and refocus.  We have a big day of semis and we are going to have to be on our game for them.”

“Our motivation lately has been to do it like an Aussie, be like the Aussie’s out there and that Aussie grit is what is motivating us at the moment.” 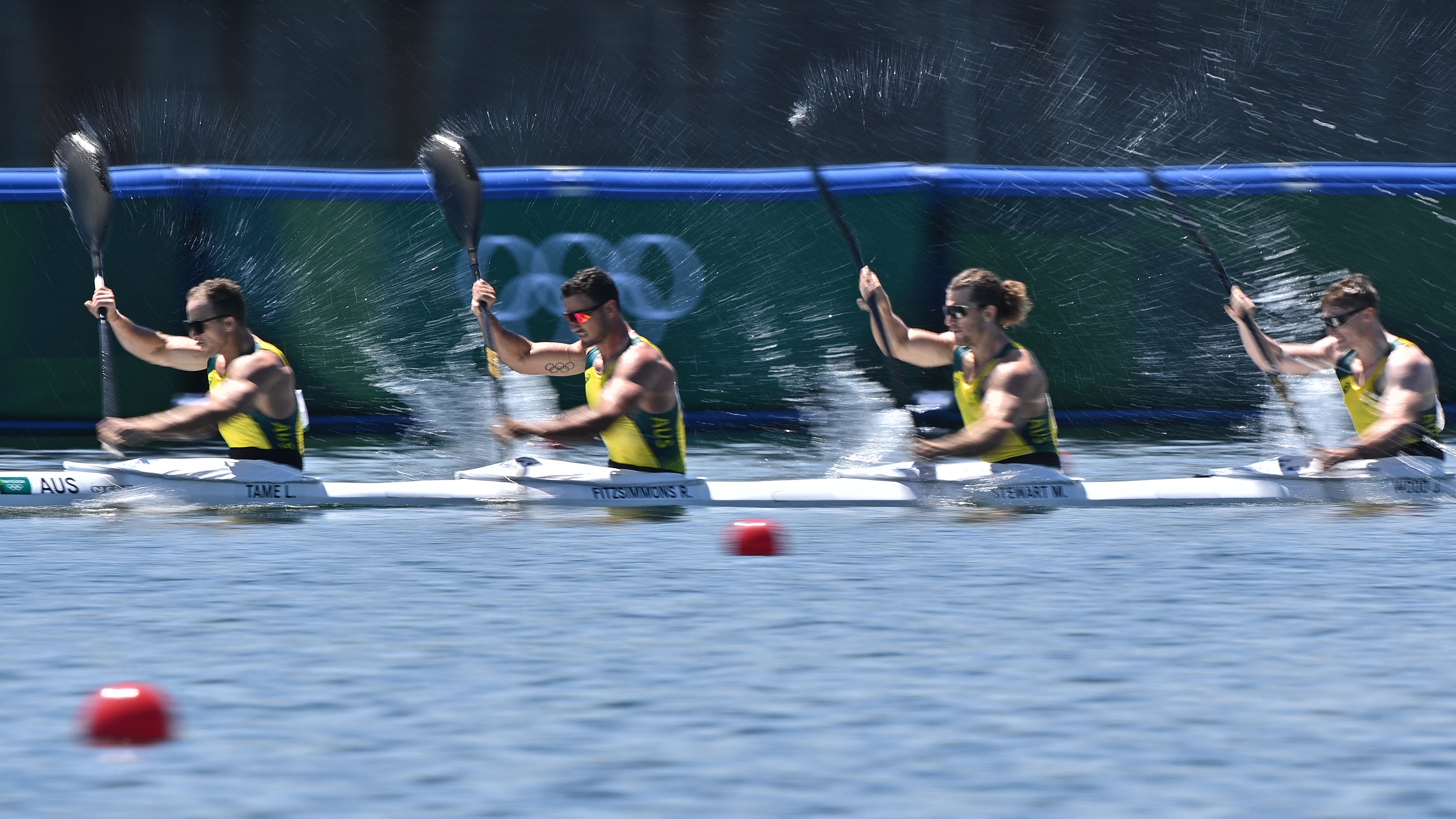 Aussie grit is also what it took for the whole team to even get to that Olympic start line, following a tough year of Games postponement, the lack of international competition over almost two years, and dealing with several injuries.

“Just take Muz (Murray Stewart), he had back surgery at the end of January.  We are on a pretty wicked run, the last 14 months have been super tough and it is just great to be here,” an emotional Lachlan Tame said after the race.

“Murray’s had two back surgeries and the Games being postponed for another 12 months has been really hard.  He sat us down on in January and said I got to have back surgery and we just said we would back him the whole way,” Tame said.

It’s been a long wait for the team and the relief of finally getting their first Olympic race in after a year of many personal sacrifices was tangible when they crossed the finish line.

“We relocated to the Gold Coast, we put everything into this crew.  Lachie (Lachlan Tame) and I have not raced yet and yesterday was massive emotions because we were super stoked to see the young guys (Jean van der Westhuyzen and Tom Green) win the medal but also disappointed for the others (Riley and Jordan),” Murray Stewart described the emotional rollercoaster.

“That is kind of the story of our last 18 months, massive highs and lows, you make the Games and then a week later you find out it has been postponed for a year.  As the boys said, I put everything into it a year ago and I got back from a back surgery and the extra year gave me another back surgery.”

“I couldn’t ask to be paddling this race with anyone else.  To sit down and tell three blokes that you are going to be out for a minimum six to eight weeks and for them to back you well within the six-month window for the Games is massive and it shows how much we all want to do it for this crew,” Stewart said.

“I think no matter what happens up to this point we’re going to put absolutely everything out there come tomorrow.  We are obviously concentrated on that semi first but come the final, look out I reckon.” 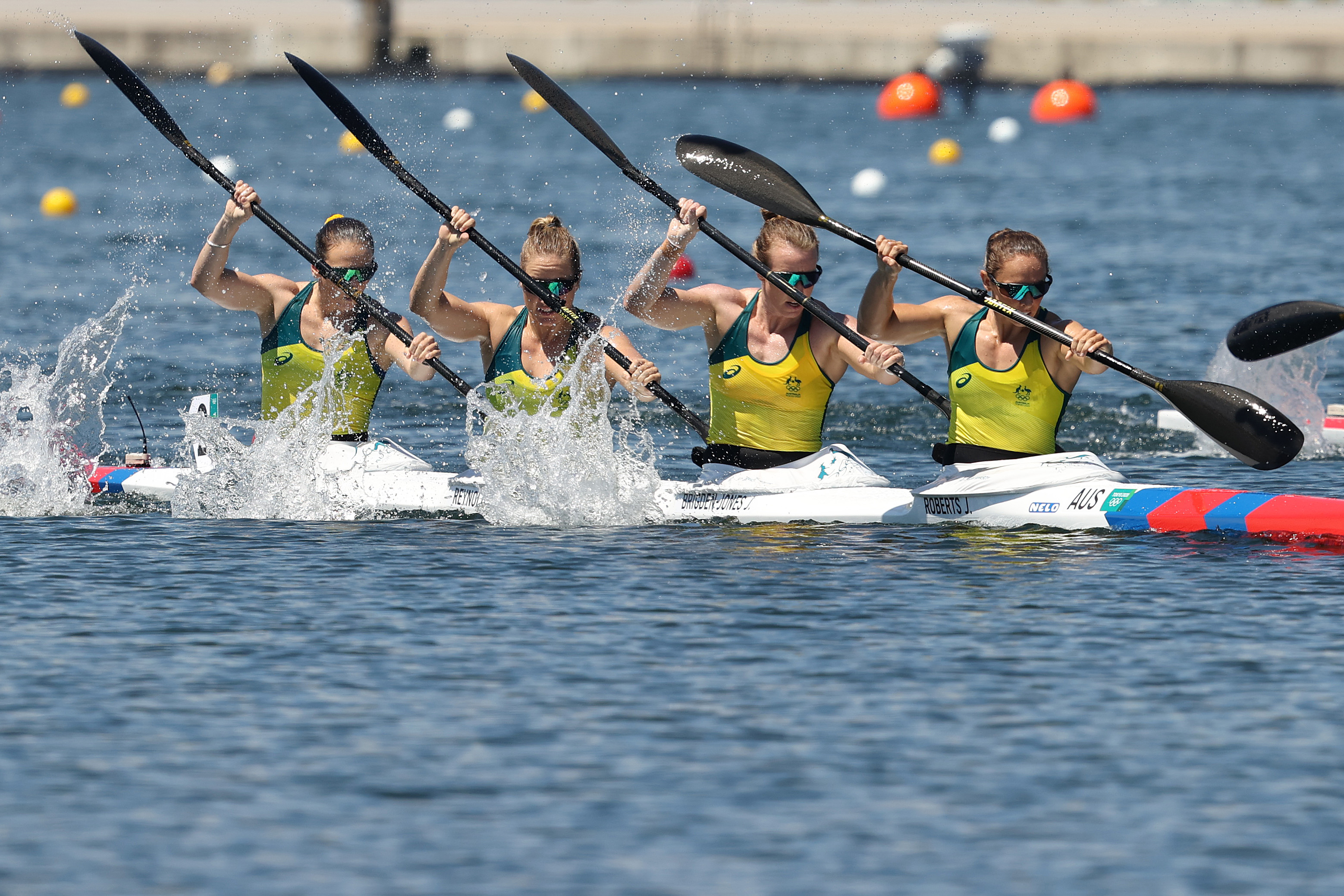 It was also a long wait for Games debutants Shannon Reynolds and Cat McArthur who got their first race in on Friday, when they jumped into the women’s K4 with fellow Games first-timer Jaime Roberts and London 2012 Olympia Jo Brigden-Jones.

After a fourth place in the heat, the crew used the quarterfinal to progress through to Saturday’s semi-final.

“That was a pretty tough race, everyone was going for it because you had to go for it to get through to the next round.  But we had a good race, and learnt something more from it so we’ll put that into our semi-final,” Brigden-Jones said.

“We did the first part of the race really well, and we probably just need to clean a few things up in the back half to make sure we have enough speed coming into the line.

“It’s been really amazing to be here at the Olympics.  It’s pretty special to think that it’s brought together the whole world, while we are still in a pandemic and we are very thankful to the Japanese people for having us,” Brigden-Jones added. 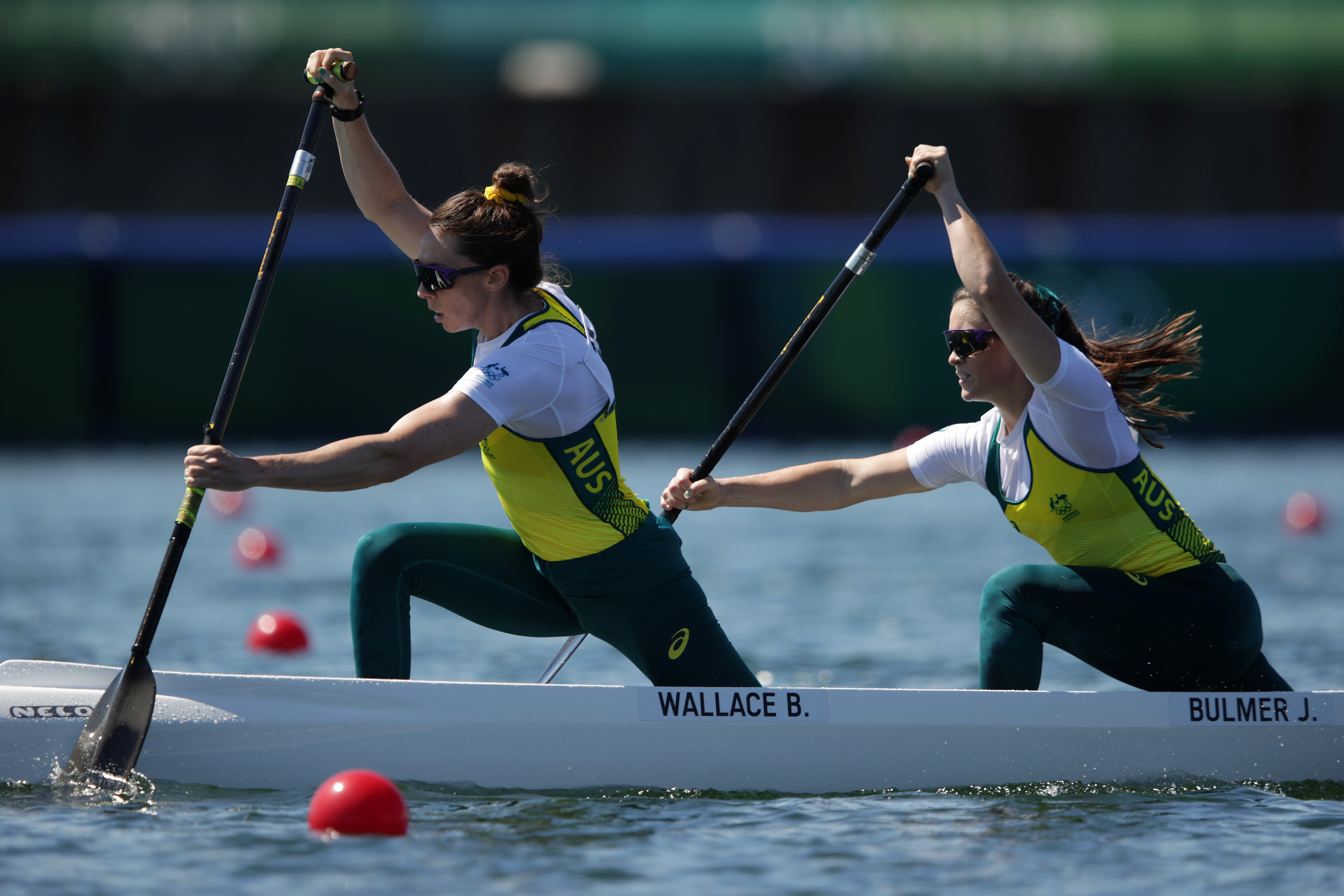 “It is the first time the women’s C2 has been in the Olympic Games but it has been on the world stage for over a decade now and we are just trying to catch up with the rest of the world,” Bernadette Wallace said.

“I feel like we put in a really good fight today and our goal was to stick with the field for as long as we possibly can.  We don’t get opportunities especially during COVID to race the best in the world and now we can take what we have done and put it into tomorrow.”

“This is the first C2 women’s race and we are the soil that the seeds are grown out of and hopefully the next generation of paddlers can make a choice, canoe or kayak and I hope we have made that easier for them and whatever we get in Paris, LA and Brisbane will be on top of our shoulders,” Wallace added.

Racing will resume on Saturday, 7 August for the last day of the Tokyo 2020 Olympic Canoe Sprint competition with the semin-finals and finals in the women’s and men’s 500m as well as the Final B in the women’s C2 500m