The most extraordinary Olympic swim meet of all time ended on the most brilliant of notes as Emma McKeon soared into the stratosphere in Tokyo today, in the process propelling Australia to its best performance ever in the Olympic pool.

Two Australian gold medals on the final day – McKeon in the 50m freestyle and then the women's medley relay team, McKeon again, winning an astonishing gold – ensured the Tokyo 2020 team became the most successful gold-medal winning squad in Australian Olympic history, with nine, one more than Melbourne 1956. In terms of individual medals won, they pushed their total up to 20, equalling the performance of the Beijing 2008 Australian Olympic Team.

Overall, Australia surged past the Russian Olympic Committee on the Olympic medal tally, moving up to fourth with 13-3-14 to move to 40 medals overall.

It was head-spinning, the assault on the record books. McKeon not only became the greatest medal winner in Australian Olympic history - surpassing Ian Thorpe and Leisel Jones - but the first Australian ever to win four golds at a single Games. Taking her Rio 2016 relay gold into account, she now joins Thorpe as the only Australian ever to win five career golds. Oh, and in the process, she became the first Australian, woman or man, to win the splash-and-dash 50m freestyle and only the sixth person ever to complete the 50-100m freestyle double.

But it is time to leave the Australian comparisons behind. McKeon has moved into the stratosphere of the sport with her performances in Tokyo. Her two golds elevated her to 11 medals in Olympic history, making her the greatest non-American swimmer of all time in Olympic history and the greatest female swimmer ever at a single Games.

Only Americans rank above her on career medals – Michael Phelps (28), Jenny Thompson, Ryan Lochte, Dara Torres and Natalie Coughlin with 12. She has drawn level with the greatest swimmers of their day, Mark Spitz and Matt Biondi with 11. And just remember that the American depth runs so constantly deep through the sport that every relay those swimmers contested carried an almost certain gold, at worst a silver or bronze.

While all around her everyone was losing their head – statisticians, most especially – McKeon was keeping hers and projected a picture of calm and confidence. The 27-year-old Michael Bohl-trained sprinter had broken the Olympic Record for the 50m in her heat and semi-final and, right on cue, she lowered it again in the final with a swim of 23.81sec.

That put her a quarter of a second ahead of her close friend, Swedish World Record holder Sarah Sjostrom, the rival she had predicted way back in February would be on the podium in Tokyo after she fell and shattered her elbow with a fall on the ice in Stockholm. She faded just at the death to close 24.07sec while defending Olympic champion Pernille Blume of Denmark grabbed the bronze in 24.21sec.

A third gold & a sixth medal in Tokyo in the women's 50m freestyle with an Olympic record. 🥇#Tokyo2020 | #7Olympics | #Swimming pic.twitter.com/bkkVLLmcLd

In what may have proved to be her last individual race of her career, Cate Campbell finished in 24.36sec. A mere quarter of a second had separated a seventh-placed Campbell from the silver medal.

But there was no time for either McKeon or Campbell to dwell on their respective fortunes. They had a relay to swim, swimming the respective last two legs of butterfly and freestyle in the medley relay final. Teaming up with backstroker Kaylee McKeown and breaststroker Chelsea Hodges, they each played their part brilliantly but, as ever, all the focus came right down to the finish as Campbell battled to make up a narrow deficit at the final turn.

🇦🇺 Australia win the 4x100m women's medley relay with a swim to remember and an Olympic record!!

The exhaustion at the end of a long, draining week was written all over Campbell's face before the start and if, indeed this was to be her final race for Australia, she wanted to make it a race no-one would ever forget. She surged up alongside American anchor leg swimmer Abbey Weitzell but Weitzell simply refused to go away. Desperately she fought back leaving Campbell with no option but to plumb depths within herself that she had never swum before.

In the very shadow of the wall, Campbell surged again and this time it carried her home. She touched in 3.51.60, just .13sec ahead of the Americans. And the first thought that entered her mind was that she had won gold – or was about to be disqualified. 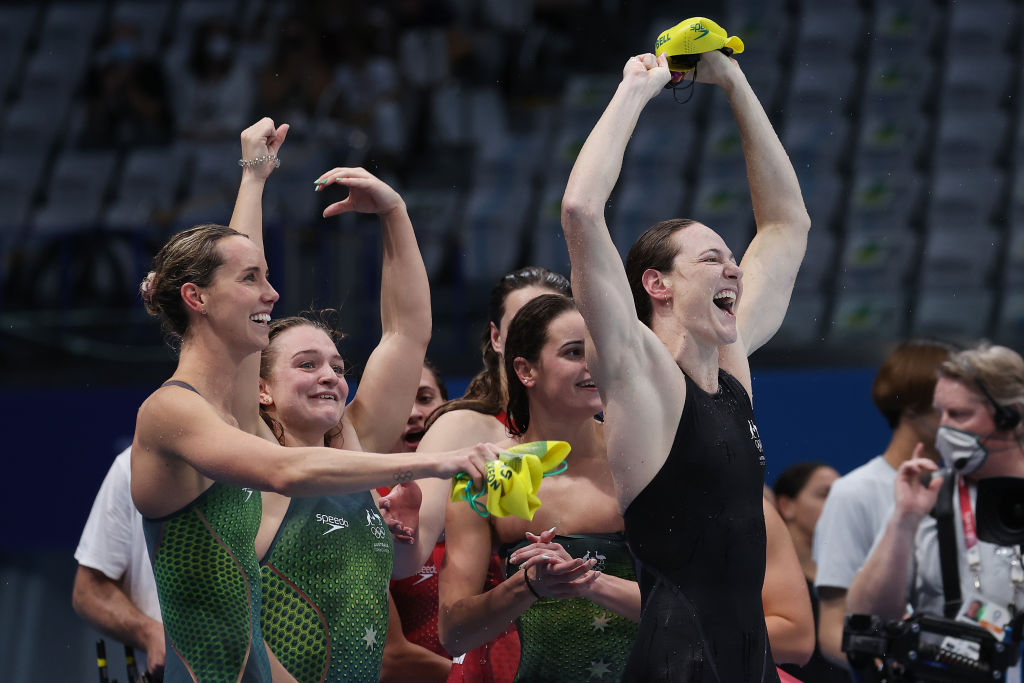 "We could have gone for broke, instead we went for gold," said a relieved Campbell later.

Yet this was a morning that belonged to McKeon – and indeed her popular and enduring coach, Bohl.

"I can't believe the week I've had," McKeon said. "I never thought I would win the 50m freestyle. I had trained for the 200m instead (the only event she cut from her program to make it more manageable). But when I went out there this morning, I had the belief I could win."

As her records were spelled out in front of her, McKeon just shook her head. "It is very surreal. The whole week I have been keeping my emotions at a certain level. I don't usually say this but I wanted to win here – that's what Bohly and I wanted."

Moreover, she said she felt she deserved this, as did her coach. "On the last day I felt I owed this to Bohly because of all the work he had put in."