From retirement to Tokyo 2020, Fernon proves anything is possible

END_OF_DOCUMENT_TOKEN_TO_BE_REPLACED
became Australia’s sixth athlete selected for the Tokyo 2020 Australian Olympic Team, coming out of a four-year retirement to nab the men’s qualification spot at the 2019 Asian/Oceania Championships and Olympic qualifier.

After some encouragement from his coach and wife, the father-of-two came out of retirement with just 12 weeks to knuckle down and take a shot at his second Olympic Games.

When asked if making an Olympic comeback was always part of the plan, the London 2012 Olympian said, “absolutely not.”

“We joke that I had a four-year taper, but coming back definitely wasn’t part of the plan,” he said.

“I thought that part of my life was over in 2015 after the World Championships in Berlin. After that I really put myself into my business and my family and started going on some great adventures and challenges.” 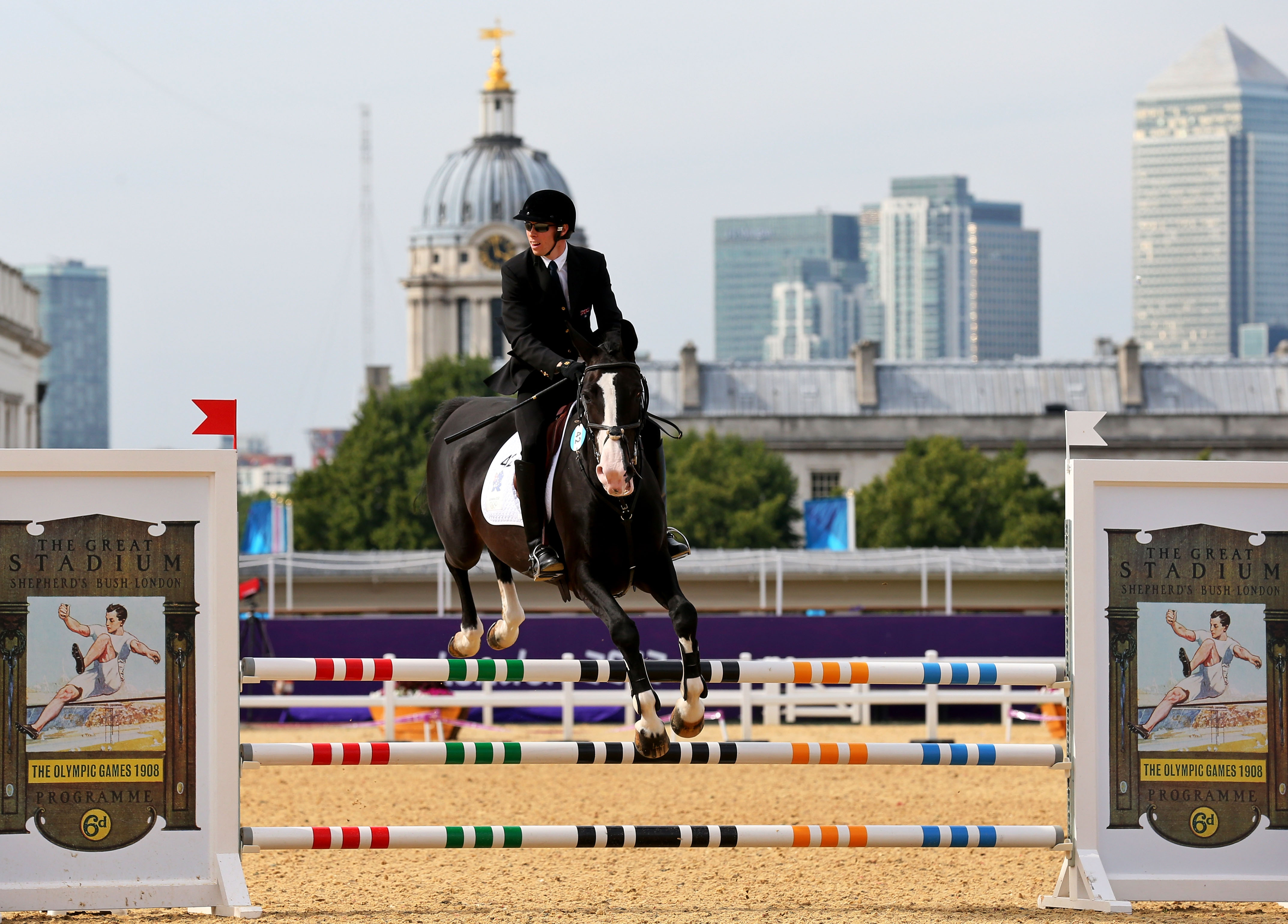 Fernon is very community-minded, with the adventures and challenges he refers to being charity rides and summits to raise awareness around mental health along with building co-living properties with an aim of reducing loneliness and making rental accommodation more flexible and affordable.

With plenty to keep him busy between running businesses, raising money for charity and helping raise a family, making a comeback to elite sport was the last thing on his mind.

Until he received a call from his past.

“Out of the blue I received a surprising phone call from my old coach, Dean Gleeson saying I need to make a comeback for the Olympics,” the 31-year-old explained.

"The Tokyo 2020 Olympic qualifying event was only three months away, but we decided that I’d just go hard for those 12 weeks, training as hard as I could and see if I could qualify again.

“Initially, it was incredibly nerve-wracking, not knowing where I was with my fitness or if I’d be able to come back,” he continued.

“I went down to the pool and swam a 2:40, which was well over 30 seconds off my personal best so I had a lot of work to do but the muscle memory was amazing, it was still there and it was great to get back into it and enjoy the sport again.

“I was able to find that passion again and my reason for getting into Modern Pentathlon in the first place, so it was really special.” 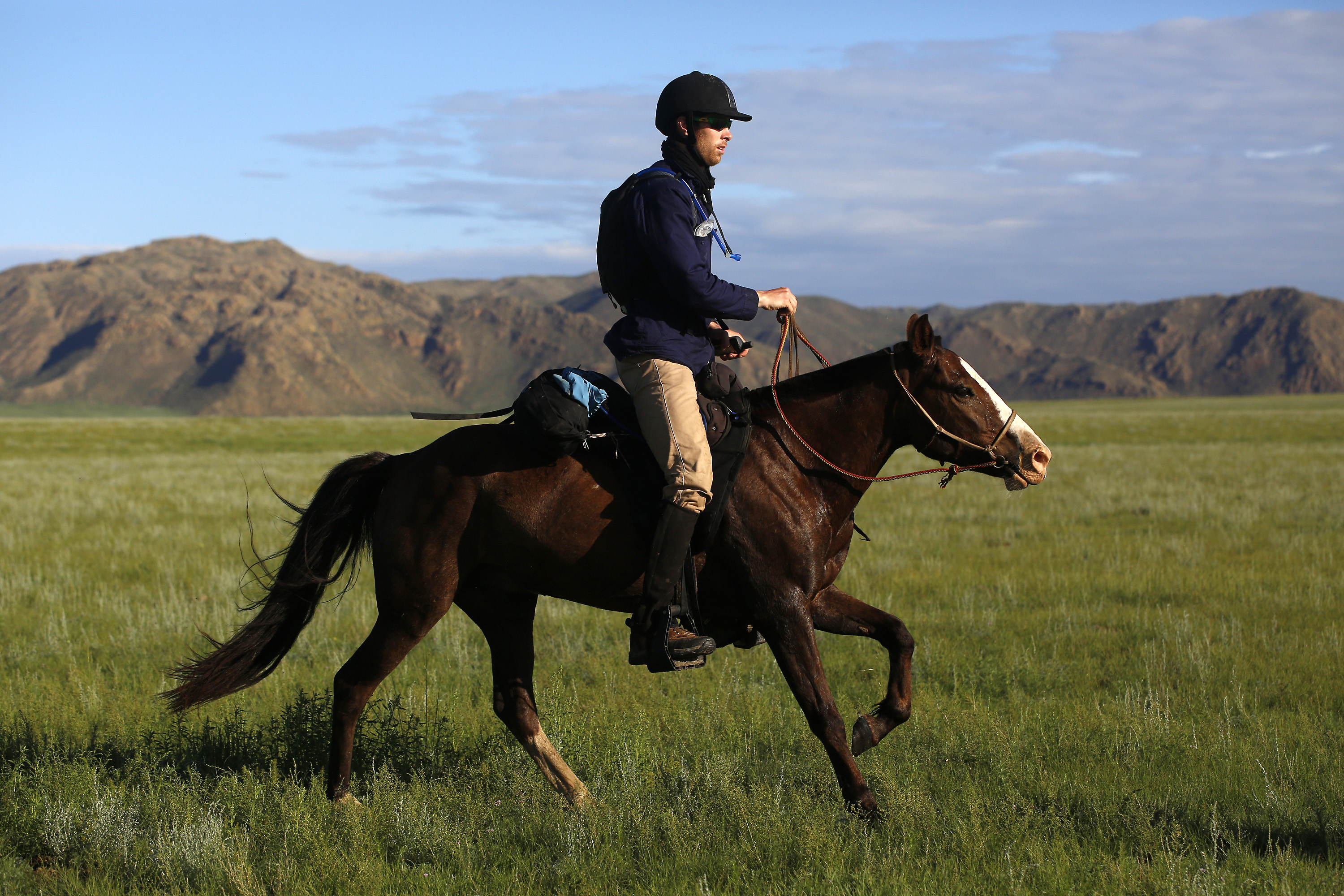 But it wasn’t an easy ride for Fernon, who drew the most difficult horse of the Tokyo 2020 qualification event.

“I drew a very, very difficult horse,” he said.

“I was actually laughing with my coach at the time. We usually take notes on all the horses and I asked for the notes on that particular horse and he said, 'Oh I didn’t get any sorry, I must have missed it,’ but the reality was we had notes on the horse, he just didn’t want to give them to me because they were so negative!

“I was able to get on that horse in the warm-up, and we had some difficulties. But to be able to give the horse the confidence to move forward with pace and rhythm was good,” he explained.

“Horses can sense when you’re tense or fearful so to just get on there, be relaxed, end up successfully winning that ride and the Tokyo 2020 spot was great.”

Fernon initially started Modern Pentathlon as a teenager. He had always been a keen horse rider and runner, but when he began the sport it was less about passion and more about balancing out a party-filled uni life.

“When I was 19, I was studying at Sydney University,” Fernon said.

“I had a riding background and I was a good runner at high school, so after about six months of repetitive hangovers, I realised I needed to make a change in my life.

“I was looking for a personal challenge, something I could delve myself into. I’d always had a passion for horses, so that seemed like a pretty logical way to get into Modern Pentathlon.

“My uncle actually lived next door to the man who trained the horses for the Sydney 2000 Olympic Games and he suggested I try Modern Pentathlon, and that’s where it all started.”

Having two of the sports under his belt made the transition easier, but Fernon still had three sports to master, two of which he’d never touched and one he was ‘terrible at’.

“I’d never picked up a pistol before, or an épée (fencing sword) and I was a pretty terrible swimmer,” he admitted. 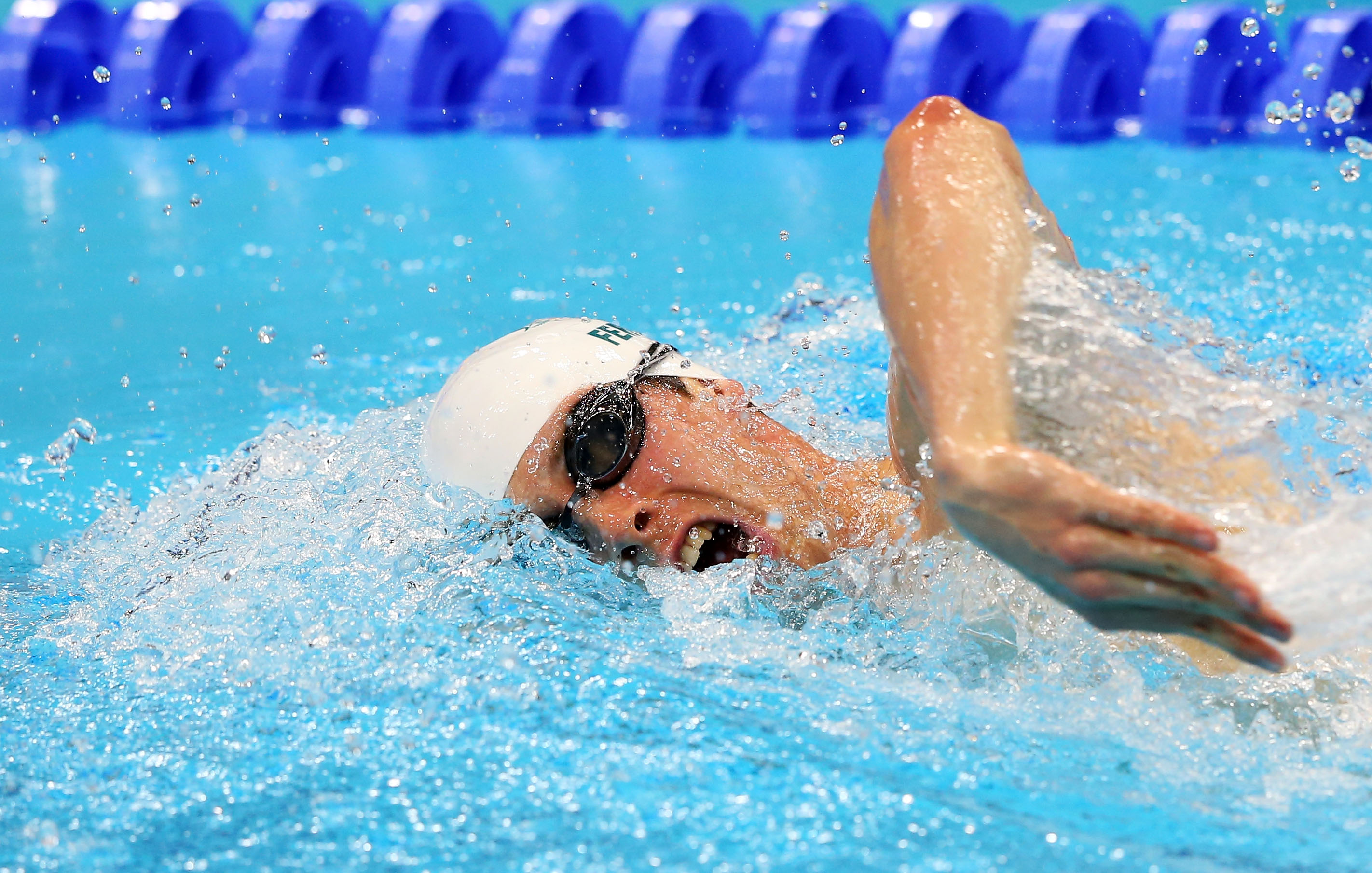 “He said to me, ‘Unless you’re considering going to an Olympic Games, it’s just not worth starting. There’s too much time, money and effort involved just to give it a go, you’re either 100% in or you’re out.’

“That was the best advice for me at that stage because otherwise, I think I would’ve just dabbled in the sport and not taken it as seriously, but after that conversation, I made the decision to commit 100% and pretty much dedicate my whole life to it, which led to me competing at the London 2012 Olympics five years later.” 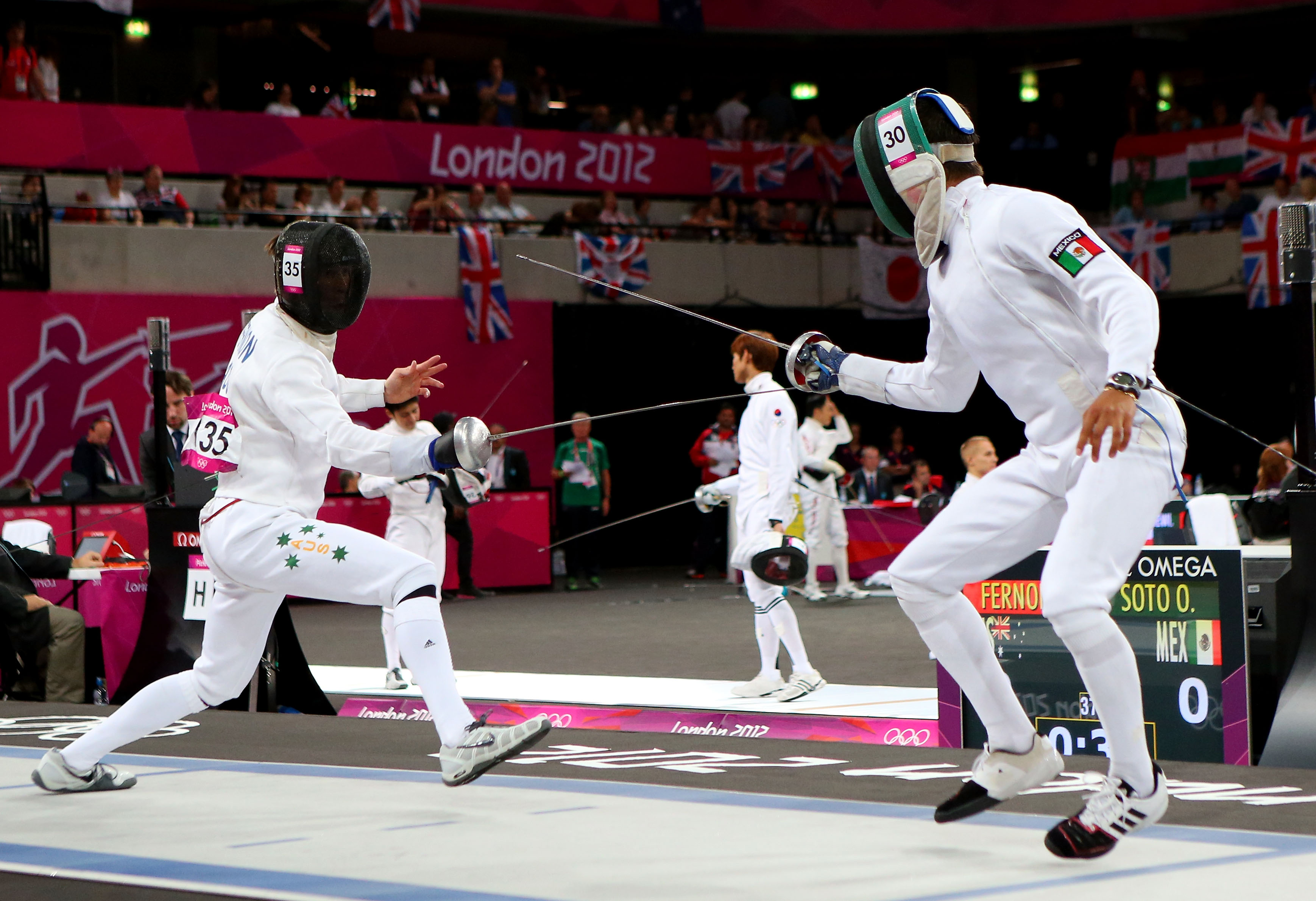 The idea of Modern Pentathlon was introduced by the military as a way of creating ‘the ultimate soldier.’ Being able to demonstrate strength in all five disciplines; fencing, swimming, horse riding, pistol shooting and cross country running made a person ideal for military combat.

In an Olympic sense, it is meant to be a representation of the ‘complete athlete’ but Fernon explained every athlete has their strengths and weaknesses.

“It’s very difficult trying to learn new sports, particularly to get to a high level.

“For me, swimming was a huge issue. Most Australians learn how to swim from a young age so are already at a high level. For me to come back a bit older and learn that sport was very difficult but also very pleasing because it really taught me a lot about myself.

“It was a great experience to go through all that hard work. The other sports like shooting and fencing are a lot more technical, which over time you develop as long as you put the hours into training.” 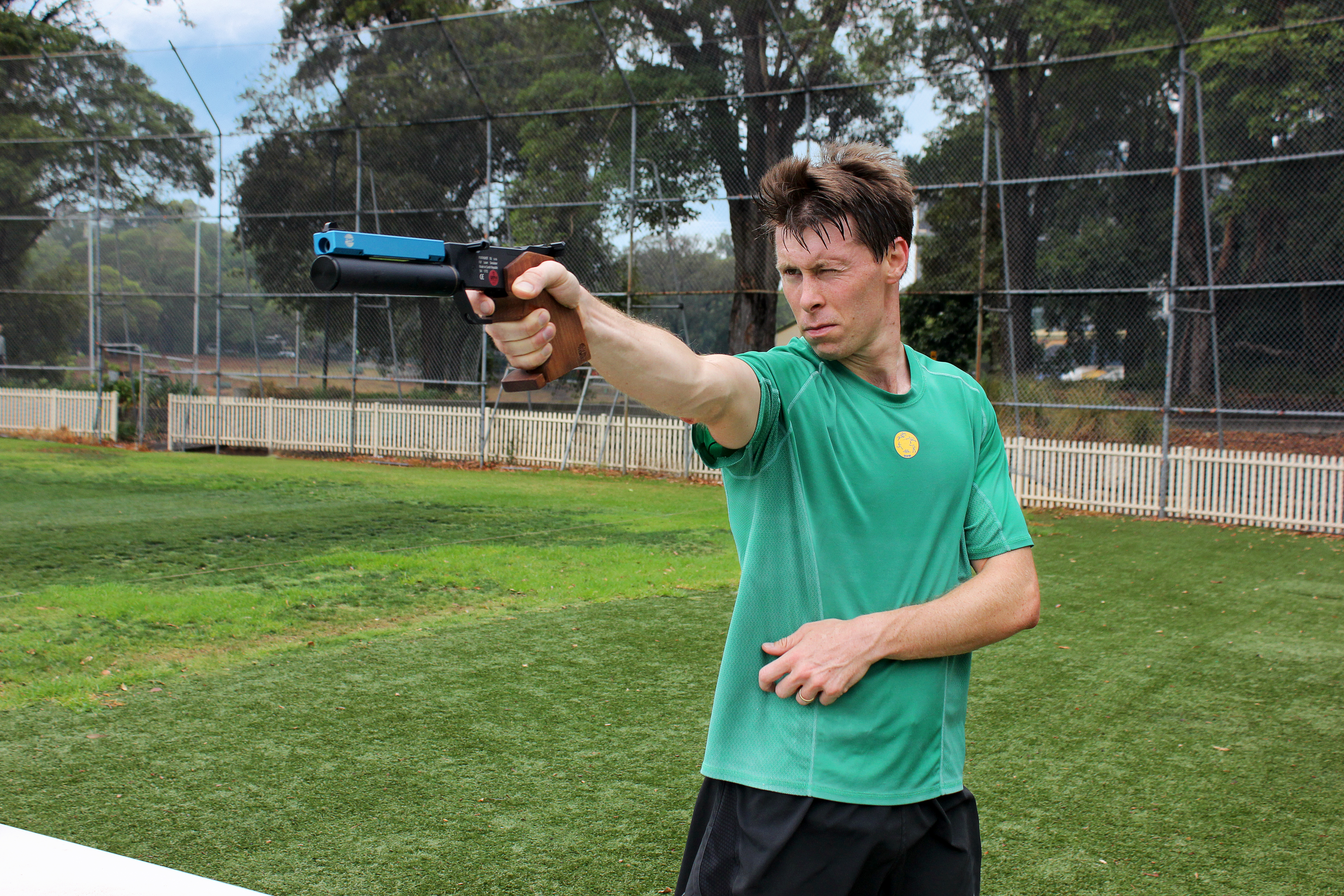 The Sydneysider explained that every discipline requires a different mindset, and it hasn’t been until his recent comeback, that he’s been able to master that completely.

“In the fencing I've got much more of an aggressive approach, I want to take it to my opponent, I want to put the pressure on them and try and get them to crack.

“Then you come to elements like the horse riding and the shooting where you really need to stay relaxed.

“You need to stay calm and go in there with a zen mindset. Then in swimming and the running you want that relaxation while you're also really trying to go all out. 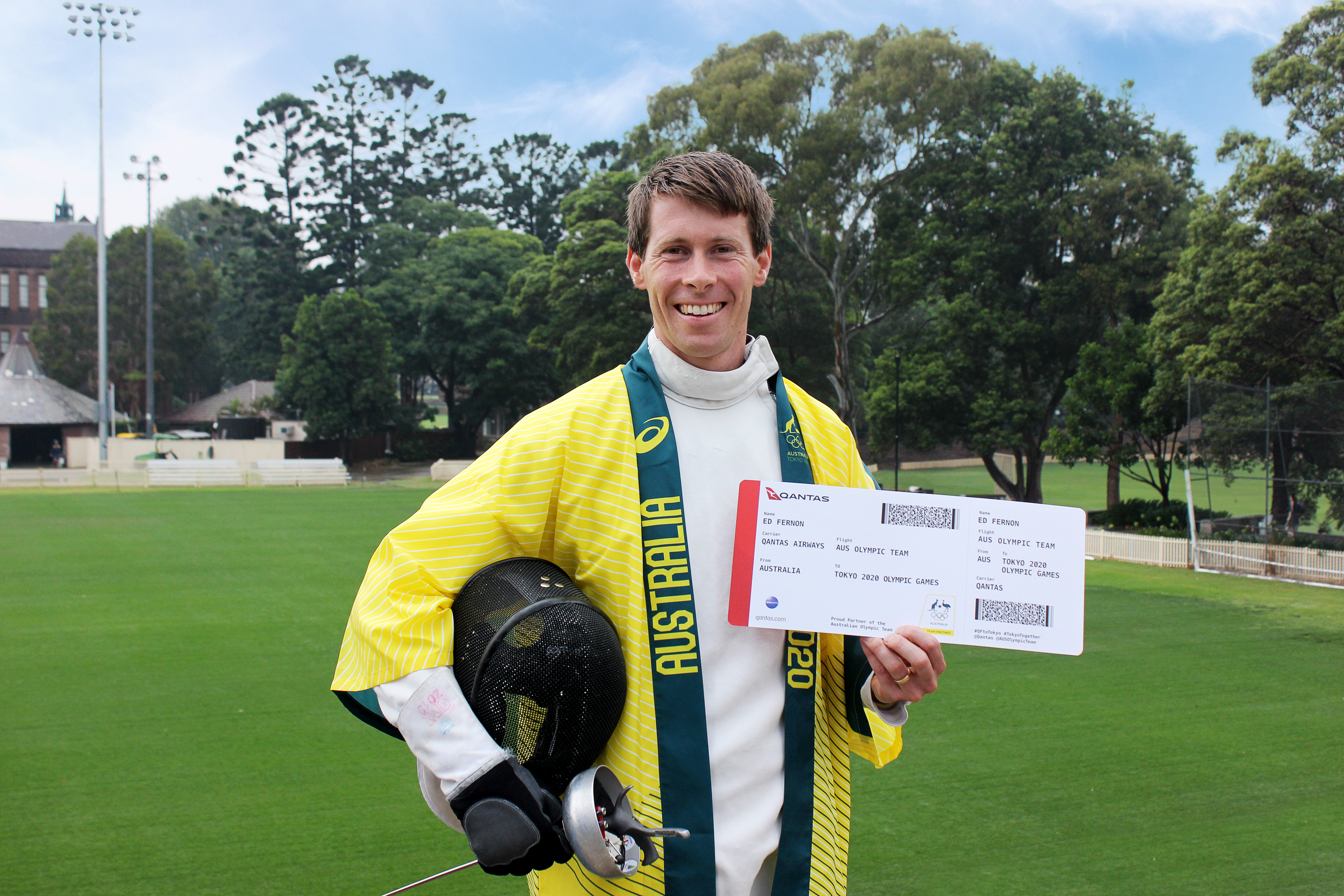 “All of those parts are incredibly important. As I've matured as an athlete this is the area where I have improved; having the maturity and knowing what I need to do at those particular times and at those big moments.”

As for how he feels about his selection for Tokyo 2020, Fernon said the overarching feeling is pride, because he was able to prove that anything is possible.

“I can remember when I made the decision to come back, I went to bed that night terrified because I knew the hard work that was required.

“I knew the pressure all of those difficult aspects of the sport so I’m incredibly proud of the way I dealt with that mentally, and putting the pressure of competing aside to qualify for my second Olympics. I never thought I'd have an opportunity to make a comeback so it’s incredibly pleasing,” he continued.

“It shows that anything's possible. If you look for the opportunities in life, you never know where you could end up or what you could achieve.”