Georgie Roweing into the history books

Rowe's time of 1.19:28.40 beat five-year record holder Lofgren's by an impressive 40 seconds and is the second time she’s made history in five months.

🔔 BREAKING NEWS 🔔 IT’S OFFICIAL! Ratified by @concept2inc @georgierowe92 has set a new WORLD RECORD on the indoor rowing machine for a half marathon for women aged 19-29! Breaking a record set by American Esther Lofgren in 2015! • #indoorinterstate #recordbreaker #extraordinaryaustralians

Back in November 2019, the 27-year old claimed the five-kilometre Indoor Rowing World Record in a blistering time of 16:54.2.

Of her most recent record, Rowe said that preparation and grit were the key to her success, but her focus was less on breaking the world record and more on logging some kms for her state with the competition taking the place of the National Championships which were cancelled due to COVID-19.

"Going into the half marathon I researched what Esther’s previous average was per 500m split and knew I was in pretty good shape when I was holding a faster split than the previous record with about 5kms to go," she explained.

"From there it was a mental game, being hard on myself to hold my form as well as staying consistent with the speed and rate.

"In the last three minutes I really turned the screws and had a bit of a crack to scrape a few extra seconds off the total time.

"There was absolutely a great sense of pride and achievement, but ultimately I was happy and very satisfied to log 21,098 metres for NSW in the Indoor Interstate Regatta."

What may surprise some is that the Narrabeen, NSW, local is a relative newcomer to the Australian Rowing Team and fell into the sport by chance.

“I trained and competed in kayak all throughout high school and married this with ski paddling at Manly Surf Life Saving Club," she said,

“My heart was stolen pretty quickly by the surf club scene and I was lucky enough to train with some incredible athletes like Naomi Flood (Kayak) and Candice Falzon (Iron Woman) and created some truly wonderful friendships,” she shared.

“My aunty, Shelley Oates-Wilding (Canoe) who is a two-time Olympian, and my uncle, Guy Wilding (Kayak) were both such big influences for me, so the Olympic dream was a light from a very young age, and initially, I thought kayaking was going to take me on that journey.

“A very good friend of mine, Abbey Jones, asked me to try surf boat rowing and from the first session I was absolutely bitten. I loved and still do everything about this sport, the comradery, the training and the socialising.

“I was also very influenced by my two older brothers who rowed at Dee Why SLSC. I rowed at Manly for one season and then moved to Collaroy SLSC where I now call home, here with a lot of early morning trainings and a bit of luck my crew and I had some very successful seasons, coming second and first at the Aussie surf titles,” she continued.

Here's to these 3 girls for making this season something special. I'll be back in the red cap before you know it 🔴👊🖤

“I really enjoyed it, much more than the other girls I trained with, and I was also significantly faster than most, but I was pretty naïve and my motto was, 'the harder you go the faster it’s over'. It worked for a little while but now that I’m a little more experienced I look back and laugh,” Rowe said.

In November 2016, a friend of Rowe's encouraged her to give the National Indoor Rowing Competition a crack. She did, although she wasn’t planning on piquing the attention of Australian Women’s Head Coach, John Keogh and Participation and Education Manager, Ron Batt, at Rowing Australia.

“Pretty soon after the competition, I had two major phone calls, one from Ron Batt and the other from John Keogh,” she said.

“Ron had been in touch with indoor rowing machine company, Concept2 and in February 2017, organised a trip for me to Boston, USA, to compete in the CRASH-B Sprints."

💥⚡️A month ago @concept2au flew me over to Boston to compete at the CRASH-B World Indoor Rowing Championships.. I had no expectations and nothing to lose. My vocab wouldn't do justice to describe this unique and amazing experience. Considering 3 months ago I had no idea I was even going, I was and still am over the moon to have a silver medal🥈The best part of it all was knowing my nearest and dearest were watching me on the live stream through an extremely painful 2000m. Couldn't be more grateful for all the love and support in this crazy event that apparently is an actual thing. Now looking forward to a solid weekend of racing surf boats with my best gal pals and boys! #fbf

The CRASH-B Sprints are the world championship for indoor rowing, raced over a distance of 2,000m.

After her impressive performance in USA, Keogh spoke to Rowe about what her future could look like, rowing for the national team.

“There was no denying that I had something that they desired, so I had a decision to make.

“I could feel my Olympic dream sparking up in my heart again, and after some lengthy discussions with myself, my workplace and my friends and family, I decided I was going to give it a red-hot go.”

Rowe was named in the national team for the first time in 2018, which she counts as one of her most rewarding and exciting moments so far.

Rowe says she counts herself lucky to be part of a team that both support and inspire her, although the toughest part of her transition has been around balancing training with both her work as a nurse and spending time with family and friends.

“Every day I am surrounded by like-minded female athletes as well as some of the most experienced coaches and support staff in the world,” she said. 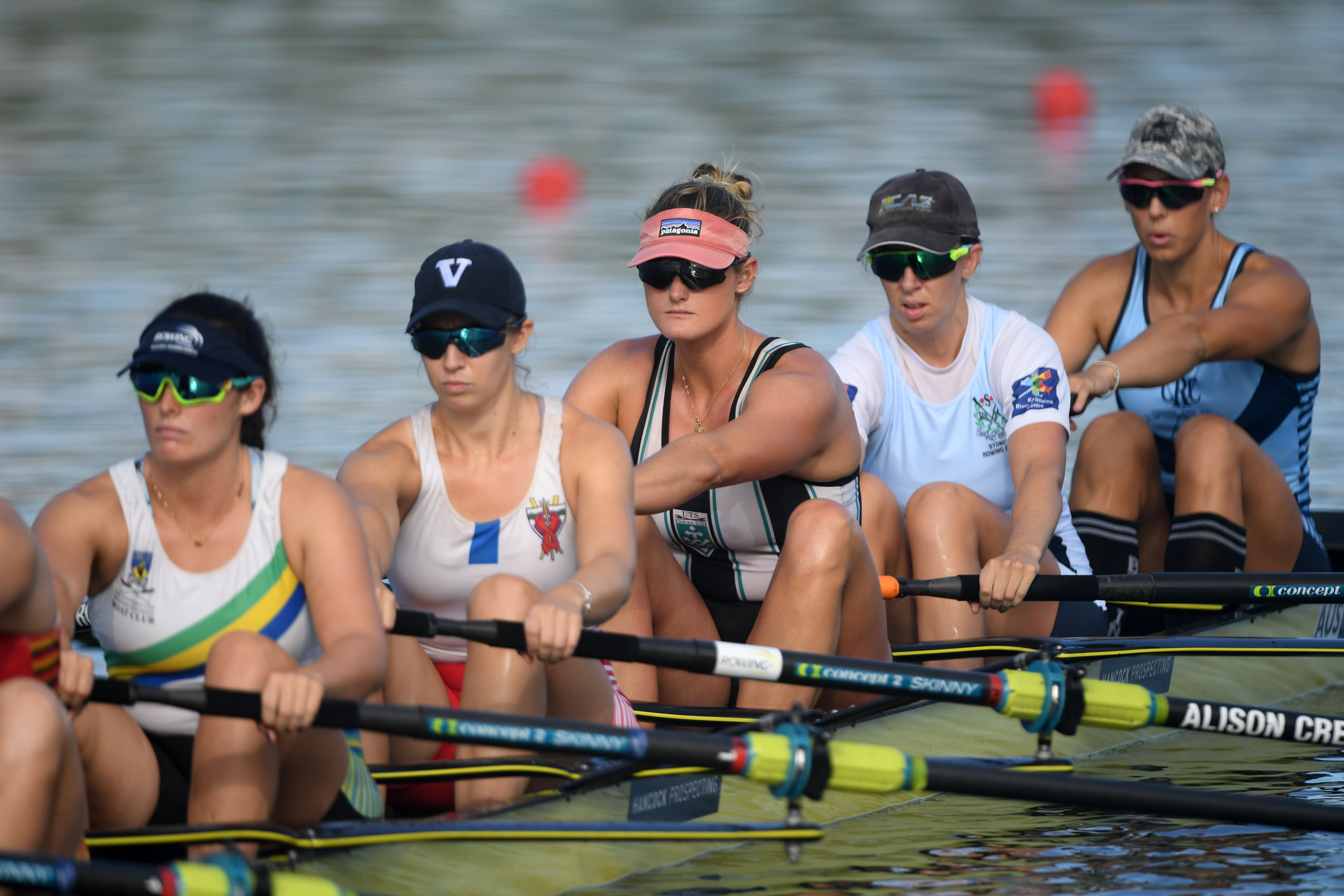 “I try to remind myself of this regularly and am grateful for everyone who has helped me throughout my journey.

“But one of the challenges I struggle with is putting all your eggs in one basket,” she shared.

“I’ve always worked and had other interests and I find it difficult and sometimes very consuming when rowing is all you do. Luckily for me, I can get home to the northern beaches on the weekend and catch up with friends and family and get into the ocean.”

With the recent postponement of the Games to 2021 due to COVID-19, Rowe’s training has settled down which means she’s been able to spend 3-4 days a week in the hospital in her other role as an aged care nurse.

“I’ve always had a passion for people, when I finished school I wanted to go to university and finish with not only a degree but a secure job,” Rowe explained.

"I became a nurse because I love people and I get a kick out of helping and caring for them.

“It’s a fantastic job and I value people and what they’ve been through so much. If you’re lucky enough for them to share their stories with you, sometimes you’ll hear something that can completely change your perspective. It keeps me grounded and reminds me that life isn’t so bad.”

Having that positive outlook came in handy when it was announced that Rowe’s Olympic dream would need to wait another 12 months.

“When I heard the Olympics had been moved to 2021, I was somewhat relieved,” she said.

“I was glad that the IOC had made a decision, because for a period of time we were in limbo, training and not knowing what was going on. It felt like the world was crumbling around us.

“Now that I’ve processed the decision to postpone the Games, of course, I am disappointed.

“We were very close to the big show and had an exciting year ahead, but an extra 12 months isn’t a bad thing for me.

“At my age and stage, it gives me time to get fitter, faster and stronger.”

Rowe’s advice to the community during the COVID-19 pandemic is to take care of both your mental and physical health along with checking in on those around you.

“We are all going through this for the first time and no one is managing it better than anyone else,” she said.

“People who you usually lean on for support might be the ones needing support. I think this is really important and something I am constantly reminding myself.

“We are all in this together, and our physical and mental health should be our number one priority right now.

“It doesn’t matter if you’re an elite athlete, a weekend warrior or just someone trying your best to get through this bizarre time in the world, having some short and long term goals are important, but so is staying present, especially in such unpredictable circumstances,” Rowe explained.

"I’ve got a few more records I want to have a crack at, but whilst I’m away from the National Training Centre, I’m really trying to do things I normally wouldn’t have access to.

“Lots of beach running and swims, a few surfs and finding any excuse to get into the ocean.

“My rowing goals haven’t changed, the posts have just been pushed back,” she said.

"And of course, a shiny gold medal would be right at the top of the list.”