Konnichiwa! Well, that's what I hope to say to people on the streets of Tokyo one day soon. My name is Jenna McCormick and I'm striving to earn a plane ticket that will take me to the Tokyo Olympics with the Australian Women's National Football team, otherwise known as, The Matildas.

Aside from making my National Team debut last year, I also played in the inaugural season of the AFL Women's league, where my team and I won the very first women's premiership, but, how did I balance two sports that had my heart?

I was born in Mount Gambier, South Australia, and started playing football when I was nine years old for my local club, Blue Lake Soccer Club. I idolised my Dad, Brian, who had an illustrious career at the same club. 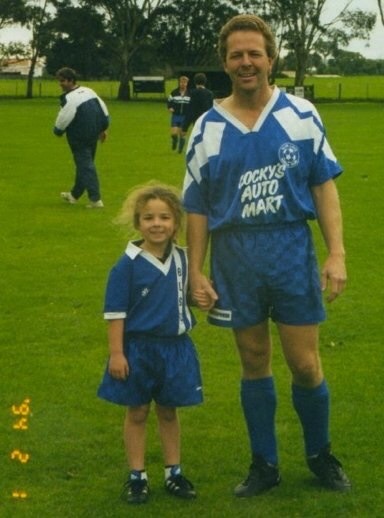 Back then, I was the only girl playing in the team.

I had a passion for all sports growing up,  so naturally, as a kid, I would be glued to the tv watching the Olympic Games. It was the best two weeks of the year.

Literally, anything I could get my hands (or feet) on, I would play, but football was the one sport that really tugged on my heartstrings, although very closely followed by AFL, which will tie into my career journey a little later on.

From 2005, I spent five years driving the 10-hour round-trip from Adelaide to Mount Gambier for weekly training. I played at state representative level across three different sports; AFL, cricket and football. 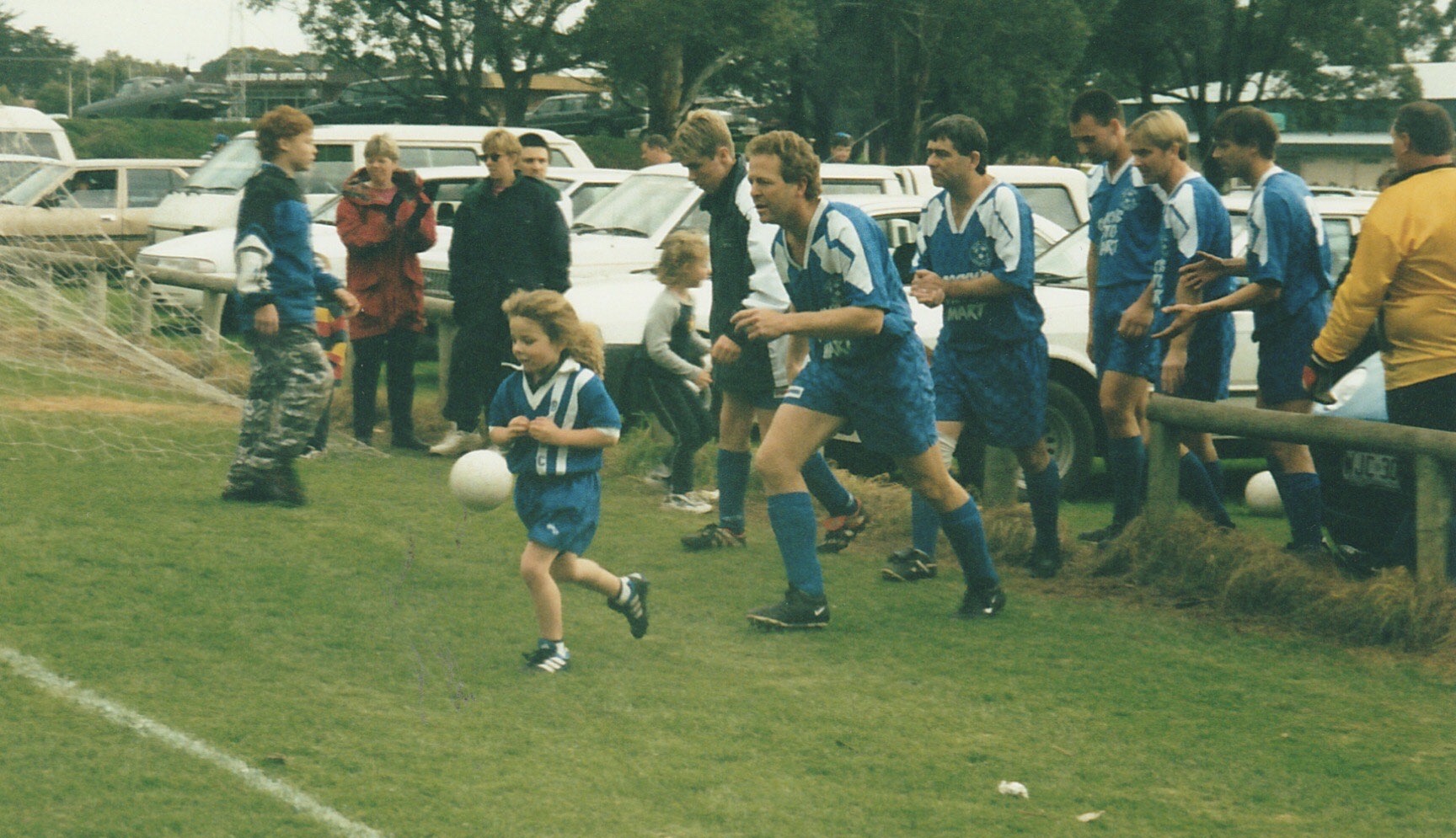 Eventually, the travel started to take its toll on my family, so, I left my country-town at 16,  for the big city smoke of Adelaide to further pursue my sporting loves and finish my final two years of schooling.

Football always took precedence in my life and even though my love for AFL and football was equal, there was nowhere to go for women in AFL at the time.

After graduating from high school in 2012, I spent the next six years playing football in the Australian National League, called the W-League, for Adelaide United and Canberra United. 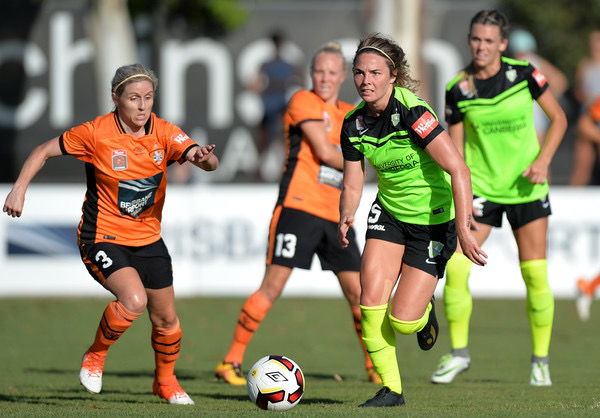 In 2016 I went on my first overseas football journey and played professionally for Stjarnan FC in Iceland, in the top tier of football.

It was a huge move for me to pack up and live to somewhere that I didn’t even know existed and was literally on the other side of the world. We went on to win the championship that year, so it was an incredible experience for me.

One sunny afternoon, I was sitting on my couch in my apartment, in the middle of the ocean somewhere between US and Europe and I read that the AFL had announced they were fast-tracking the AFL Women's league to commence in 2017 from an originally scheduled date of 2020 and immediately I knew I had to be involved. 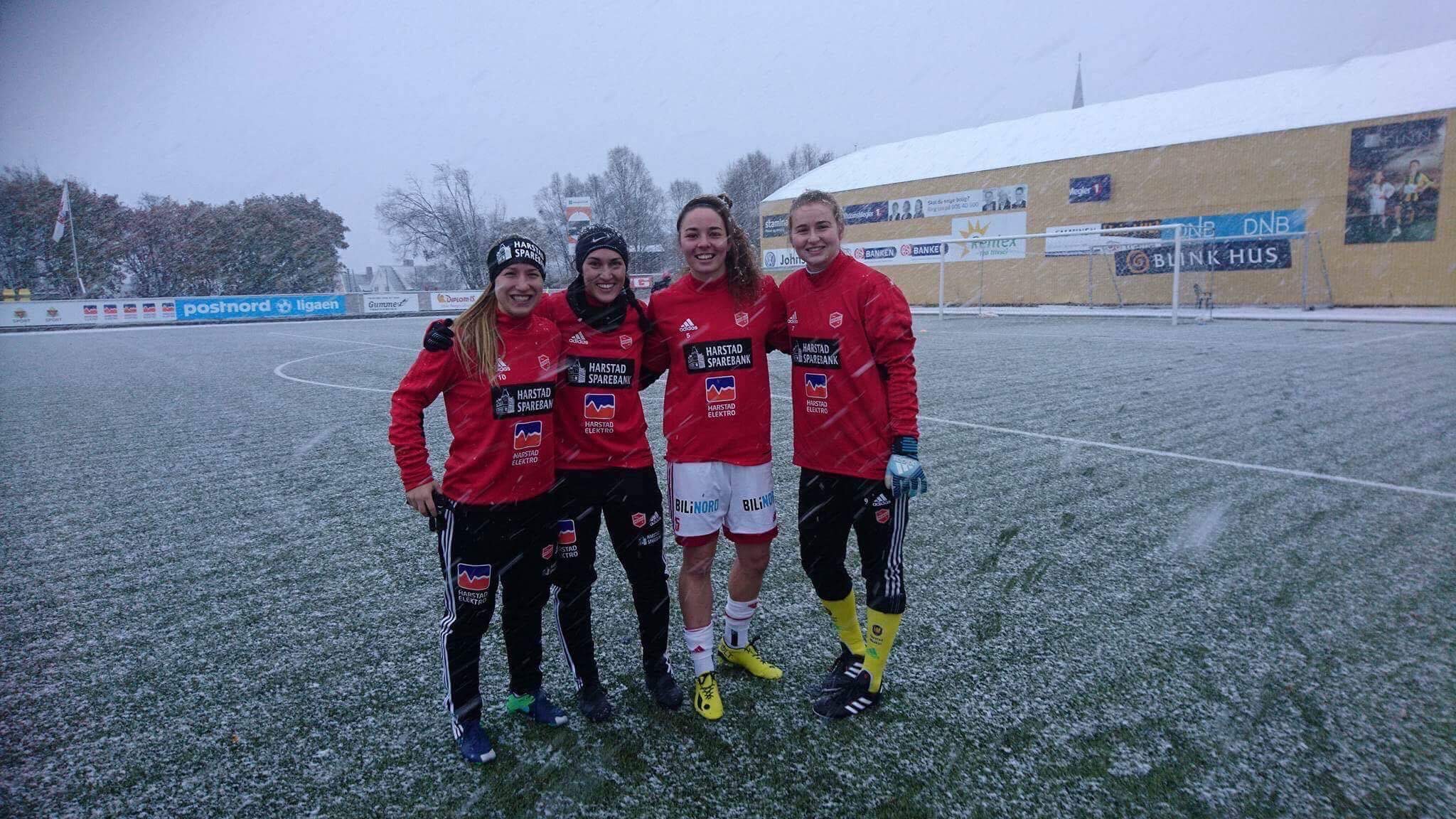 I loved AFL but never had the opportunity to play beyond a few tournaments, then, before I knew it, I was drafted at pick #3 to the Adelaide Crows in their inaugural Women’s team for the 2017 season.

Upon returning home from Iceland in early October 2016, I got straight into my preparations to start the next W-League season at the end of the month with Canberra United, although this time it would look a little different as I had to juggle the new AFLW pre-season and the current W-League season.

Now, the first season of the AFLW was super special, because the team got to experience all the ‘firsts’ that would never be able to be experienced again and go down in history. The first training session, putting on the first training uniforms, first photo day, first captain announced, first team meeting... I could go on for days.

I missed out on a lot of these firsts due to balancing both sports, which was a little hard to deal with at the time, but, nonetheless, I was committed to finishing a job before I began a new one. The value of ‘finishing’ a commitment has always been important to me. 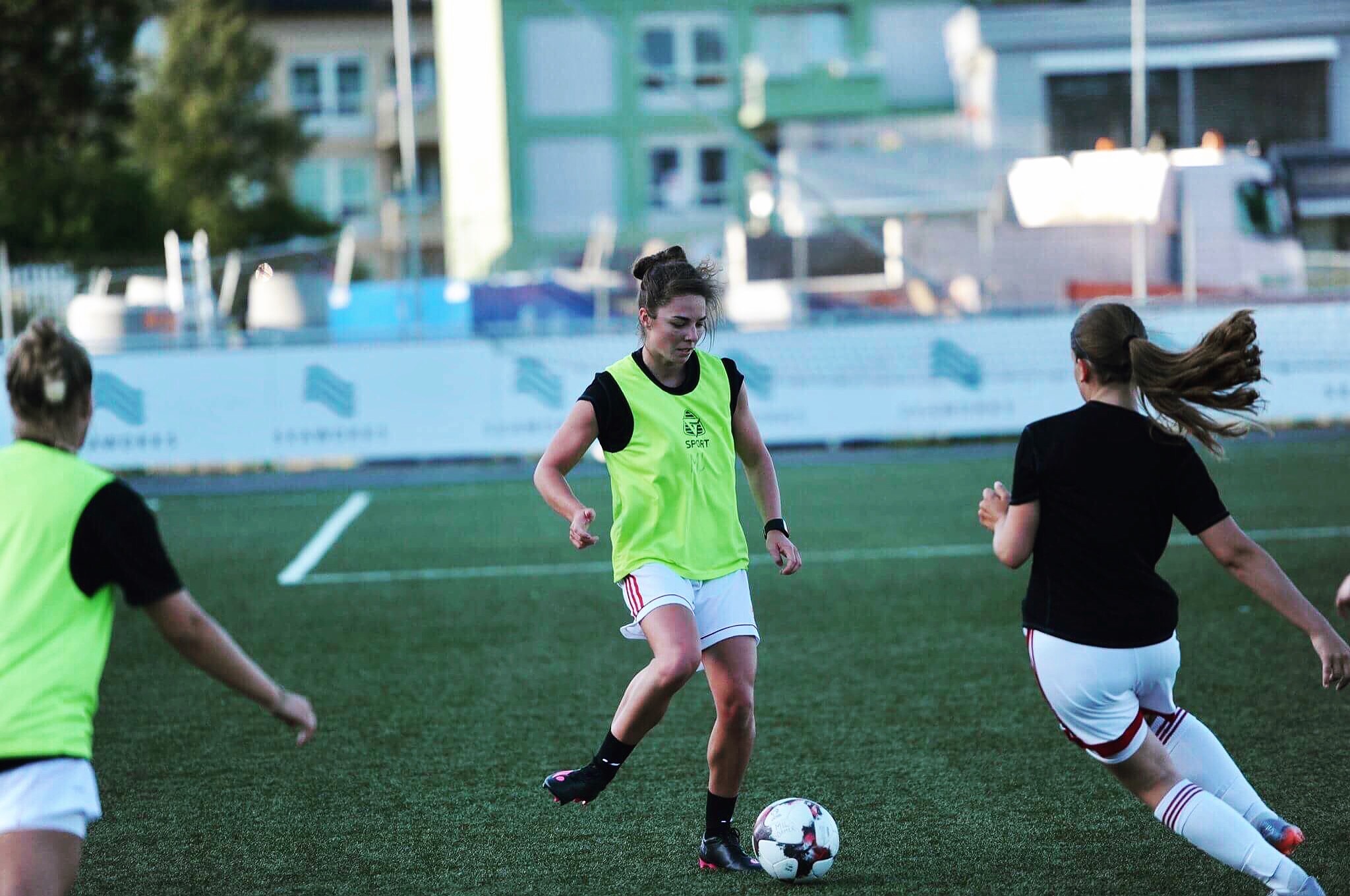 I missed Round 1 of the AFLW, where my team beat the GWS Giants in front of 10,000 people, as I had a semi-final that same weekend with Canberra which we sadly lost.

Still dealing with the disappointment of losing the W-League semi-final, I knew I still had to be there for my AFL teammates and celebrate their win, so I raced home to join them at full-time and, wow, what a feeling!

To my surprise, I was included in the game-day squad for Round 2 and was set to make my AFLW debut against the Western Bulldogs in Melbourne. That week was one of intense emotions, from losing a hard-fought semi-final to flicking a switch and heading to Melbourne four days later, playing my first AFLW game, kicking a goal and getting the win, it was true roller coaster ride.

We went on to only lose two games that year, one of them to the Brisbane Lions, who we ended up meeting in the inaugural Grand Final. 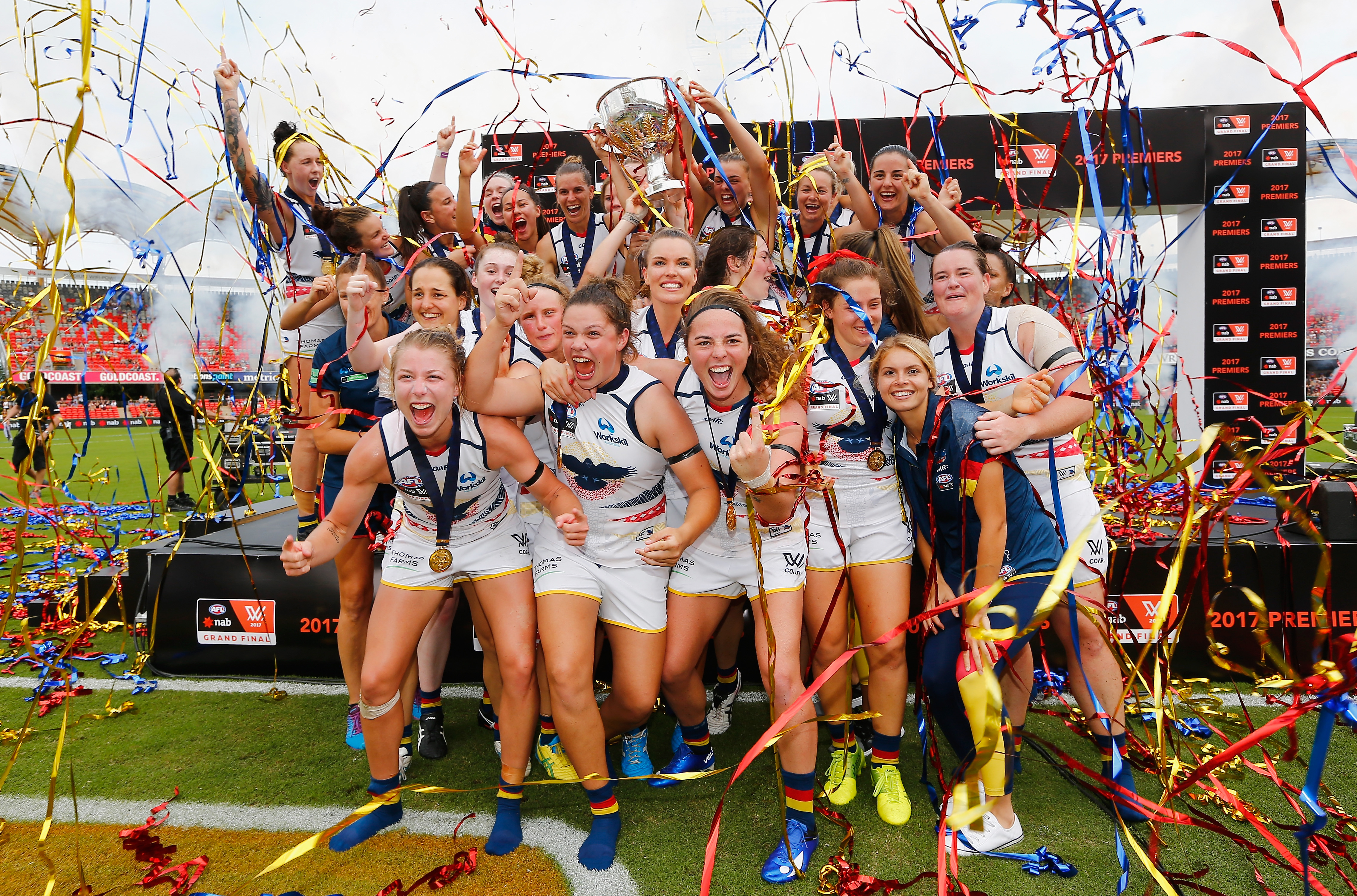 The AFLW Grand Final week was where I learned the importance of staying present in the moment, and I’m sure many athletes recognise the power it holds.

I would catch myself thinking about what it would be like to experience that ‘winning feeling’ after claiming the first AFLW grand final. After all, this would go down in history. We would be the very first premiers, which was huge.

Every time I would think about it, I would get so nervous, so, I made a pact with myself to not focus on the final result or celebrating before we’d even won - because I knew the disappointment would’ve been so much greater.

We spent four days on the Gold Coast in preparation for the big dance, trying to zone out as much as possible from the media hype. 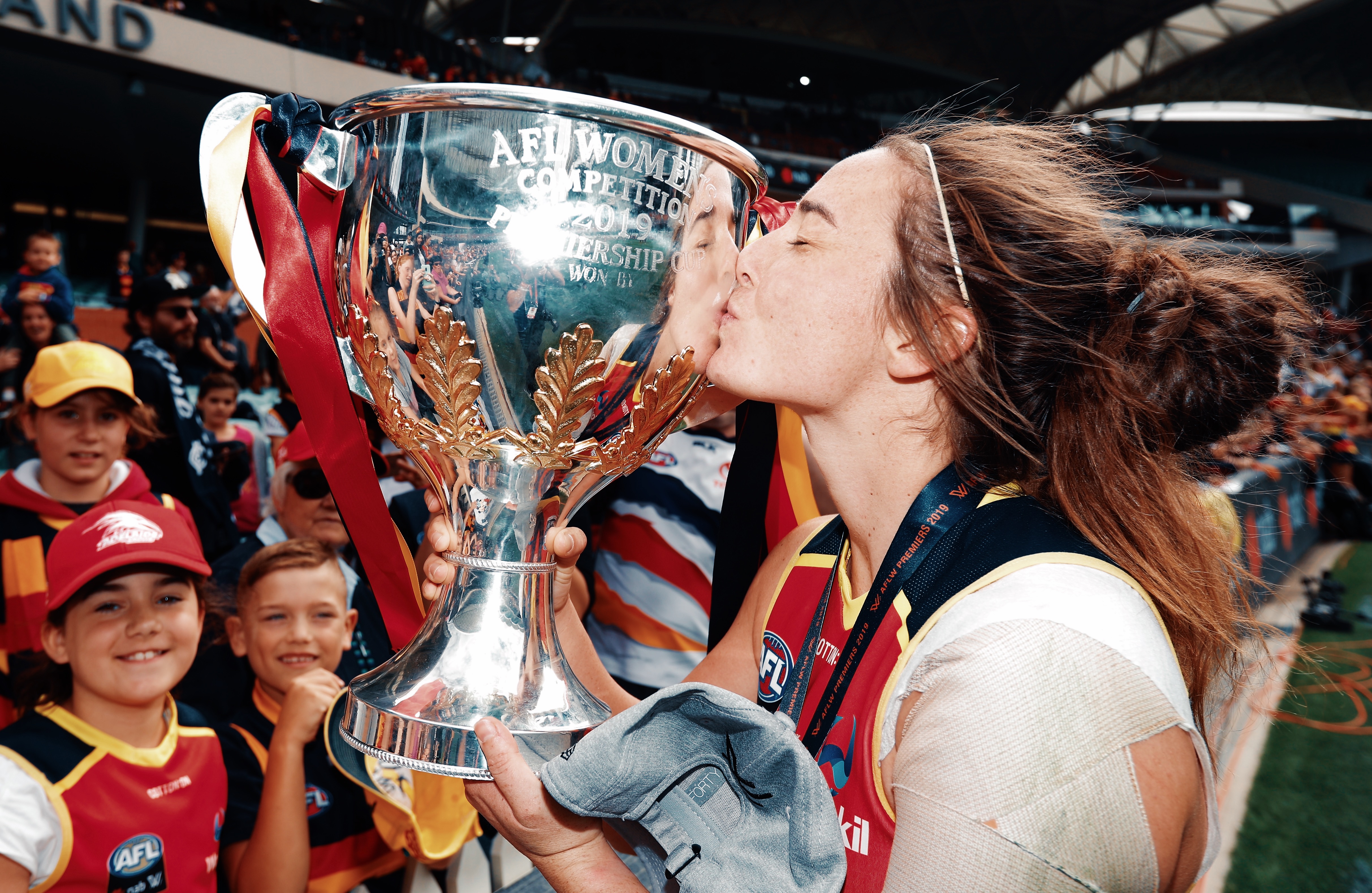 The night before the game, the whole squad gathered and sung classic songs while teammates played the acoustic guitar. It was a true squad bonding experience that led us all feeling extremely positive before the game!

After four quarters of footy, we came out victorious and the feeling was honestly indescribable.

We did it and went down in history as the first-ever AFLW champions. I remember finding my family in the crowd, hugging my mum and just crying with happiness!

The following year would prove to be the worst year of my life, but absolutely the most important. I'd fallen out of love with football and almost quit altogether, but, that's where my Olympic dream started to look like a reality...