Pistol shooting is the right medicine for Elena

END_OF_DOCUMENT_TOKEN_TO_BE_REPLACED is equally skilled with a surgical scalpel or sports pistol. Her hands are steady, her concentration is unwavering, and her skills are precise.

As a doctor and an Olympic shooting athlete, Galiabovitch also knows how to juggle her medical career and ongoing studies with her time on the pistol range. With COVID-19 throwing an unforeseen curveball at the beginning of the year, all plans for the year have been erased and re-drawn.

“There hasn’t been a single plan that I have for this year that I haven’t had to re-think,” she said.

But Galiabovitch is used to adapting and re-adapting to suit the circumstance. While studying for a  master’s degree and undertaking research work in her goal to become a urological surgeon, she has been working as a locum at Monash Health hospitals in Melbourne. 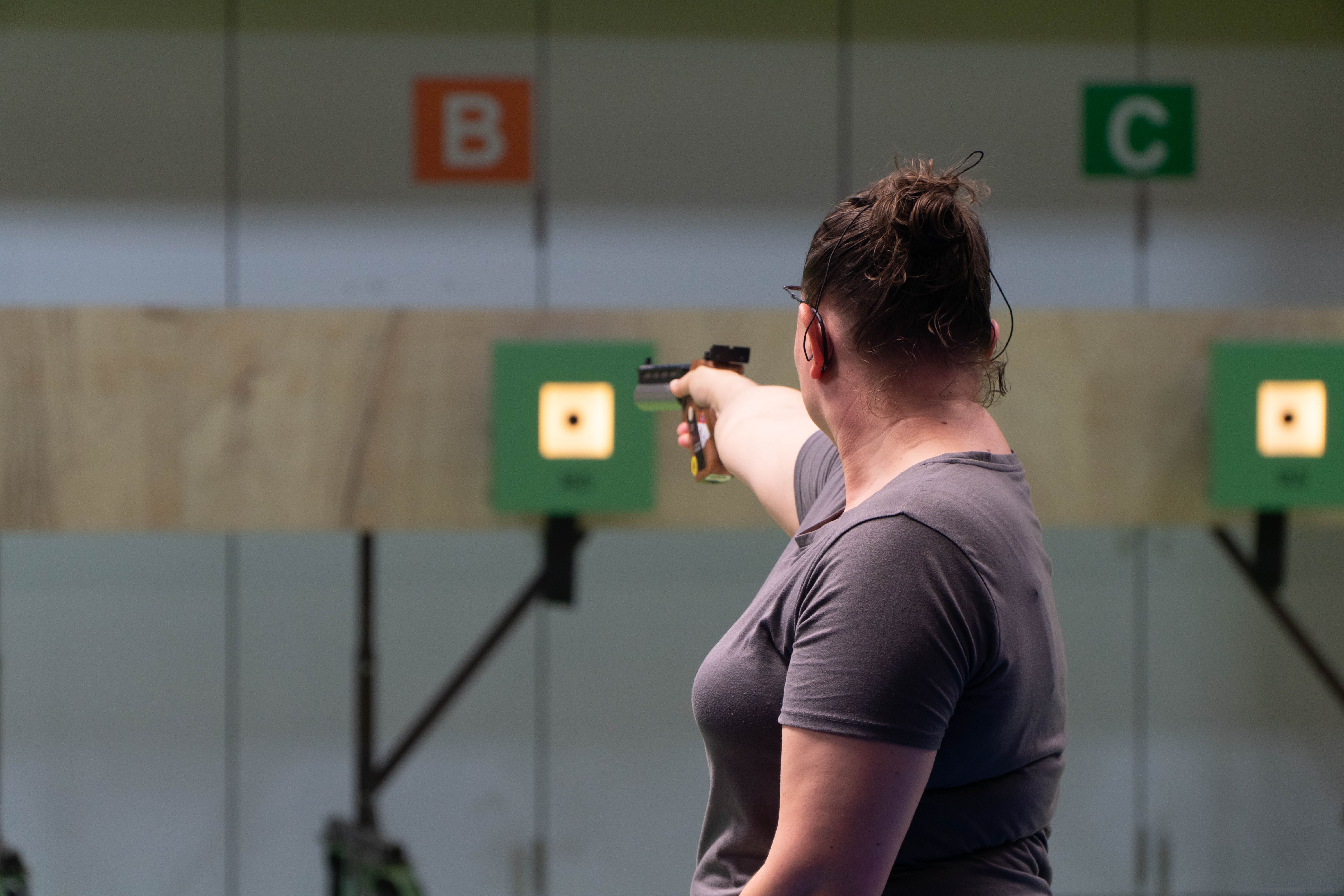 The postponement of the Tokyo Olympic Games by 12 months has seen all domestic and international shooting competitions cancelled and new schedules are yet to be developed.

Despite these obstacles, Galiabovitch remains upbeat saying, “Everyone has had to make their own adjustments. This year has been a lot of adjusting, changing and adapting. That’s fine. You find your way eventually.”

Even though her father, Vladimir was a world-renowned pistol coach, shooting didn’t truly find its way into her life until 2014. As a teenager, Galiabovitch wasn’t serious about shooting.” It felt like a chore to me. There were other things that I wanted to do,” she explained.

But in the lead-up to the 2014 Glasgow Commonwealth Games, Galiabovitch decided to attend various competitions around the country and performed strongly. Intrigued, she decided to review the Games selection criteria and saw how close she was to meeting team qualification. Suddenly, the competitive fire was lit.

“I wanted to be selected on these teams. It was a different mindset to what I had participated in shooting before when I was a teenager,” she said.

Two years later, Galiabovitch was selected on the Australian Olympic team for the 2016 Rio Olympics where she competed in the 10m Air Pistol and 25m Sports Pistol.

Her international shooting career continued at the 2018 Gold Coast Commonwealth Games where she claimed the silver medal in the 25m Sports Pistol and the bronze in the 10m Air Pistol.

Days later, and despite yearning for a long-overdue break, Galiabovitch decided “begrudgingly” to use the intensive 13-week build-up to the Gold Coast Games and head to the World Cup event in Changwon in Korea and was rewarded with the 25m Sports Pistol gold medal when shooting a personal best score of 583.

Despite the long hours and the hectic and often unpredictable workload as a doctor, Galiabovitch has continued training as an elite athlete as she finds it positively counterbalances her medical career.

She is also aware that many medical professionals face mental health challenges because of the emotional nature of their life-saving work, and that medicine can become all-consuming.

“Sometimes having an extra perspective, or something else in your life, is really helpful to be a balancing factor so you don’t go stir crazy,” she said.

“I feel it (shooting) gives me something extra in life, something else to focus on. It’s quite a selfish reason why I do it. I obviously feel a great honour and I’m so lucky to represent Australia and that’s a wonderful feeling. But I’ve worked really hard for that as well. It hasn’t been handed to me on a platter,” she said.

Galiabovitch loves her work as a doctor.

“It’s actually a real privilege for people to let you into their lives. It’s not very common to go up to a person and ask them a really personal question without ever having met them before or expect them to respond and give you an honest answer.

“There is a privilege and a trust which goes with that relationship. I really enjoy being able to contribute during a stage of someone’s life where they’re not well. I don’t remember the names of all the patients that I have told they have cancer or have had a bad diagnosis, but they will remember me for the rest of their lives. I try to make a difference in that way and at least give them something at that moment that is helpful,” she added. 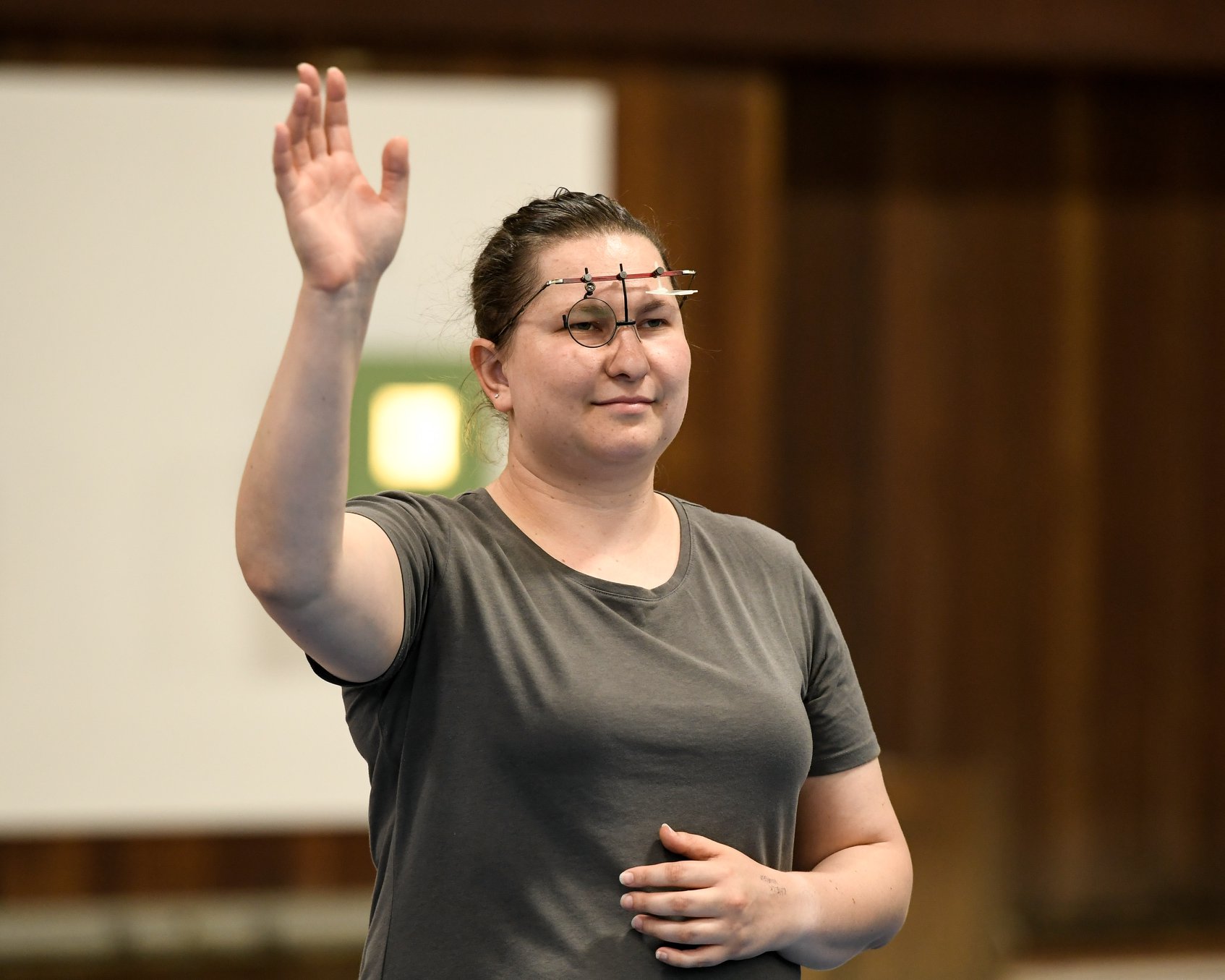 Galiabovitch sees many similarities between her work as a doctor and her athletic career as a world-class pistol athlete. As a doctor, she partners with fellow doctors, nurses and a range of other medical professionals in seeking positive patient outcomes. As a shooter, she is working with coaches, strength and conditioning experts, dieticians and psychologists to excel on the range.

She also believes there are many transferrable skills between medicine and elite sport and considers shooting to have a different pressure.

“I take lessons from shooting into the workplace. The pressures (on the range) are very different but resilience and ability to cope are transferrable. In the workplace I feel quite certain about my knowledge and I know what I don’t know, and there are other people around to help if you don’t know. I’m still in training and I’m not expected to know everything, or what to do in every circumstance. There are other people there who you can rely on for help.

"On the (shooting) line, I am the only one responsible,” she said.

With her dad, Vladimir, the National and Olympic team pistol coach, Galiabovitch knows he has a high level of understanding of her ambitions as she aims to advance her medical career while targeting the Tokyo Olympics. And, like all father-daughter coach-athlete combinations, clear boundaries must be set. Thankfully, her mum Victoria and older sister Eugenia, haven’t been forced to play referee!

“We’ve got better with our communication over the years, just expressing our opinions to each other and listening to each other. It’s a two-way street and I’ve got to play my part in that as well. I feel like I am becoming more prepared. I am taking more responsibility with the planning of things and being more accountable for my actions,” she said.

“When I was younger, I’d just look at his side of it rather than what I can do. But we’re all adults now. We respect each other’s time. I don’t want to intrude on his out of work time and I also try to set that boundary for myself.”

With the Tokyo Olympics postponed to July next year and COVID-19 closing ranges, Galiabovitch has been working closely with the Victorian Institute of Sport’s strength and conditioning staff, swimming twice a week and running on a treadmill while watching one of her favourite TV shows, MasterChef.

While shooting is a sport which allows participants to keep performing at the highest international level for several decades, Galiabovitch has no clear immediate competition plans beyond the 25m Sports Pistol event at the Tokyo Olympics, but retirement isn’t a consideration.

However, advancing her medical career will be the higher priority.

“Medicine is very important to me. I don’t see myself being a shooter when I’m 65, but I’d really like to keep being a surgeon until that age. It’s what I hope to do for the rest of my life.”