The Australian Olympic Committee has announced the 15-strong Olympic Softball Team for Tokyo as the sport makes its return for the first Games since Beijing 2008.

Dual Olympic medallist Stacey Porter will captain the team, with the 39-year-old the only team member to have competed at an Olympics.

The team, known as the ‘Aussie Spirit', will compete in the first event of the entire Games, facing off on the softball diamond against hosts Japan on the morning of 21 July in Fukushima to open the Tokyo 2020 Olympic competition.

The team qualified in the winner takes all Asia/Oceania Olympic qualifier in China back in September 2019, impressively only allowing only four runs scored against and committing no defensive errors throughout the entire tournament.

Chef de Mission for the Australian Olympic Team for Tokyo Ian Chesterman was thrilled to announce the softball team.

"This is a fantastic day for these 15 players and softball in Australia," Mr Chesterman said. "This is a dream 13 years in the making, to make this Australian Olympic Team as softball makes its Olympic return for the first time since Beijing in 2008."

"Congratulations to all the players, coaches, families, teammates, friends, supporters and everyone at Softball Australia who have helped achieve this incredible Olympic milestone today.

"This team has shown enormous grit and drive to not only qualify for the Games but to be as ready as they can be come July. Without access to international competition in Australia, the players have been training and competing in Japan under strict protocols to make sure they can be ready to step onto the Olympic arena in Fukushima. It has taken an incredible commitment from each and everyone of them.

"With the potential for local crowds and Japan's enthusiasm for softball, I'm sure these players will enjoy a fantastic atmosphere in Japan and will have millions of Australians cheering them on from back home.

"I also want to pay particular tribute to Stacey – to make a single Olympics is a special achievement, but to make your third Games after staying at the top echelon of your sport for decades is a remarkable achievement."

Captain and proud Kamilaroi woman Porter has a wealth of experience, from Olympic bronze and silver medals to playing professionally in Japan over her 20-year playing career.

"We're as close as we've ever been to go and compete on the diamond at an Olympic Games, so that's a good feeling.

"Balance is a good word for our team, it's always good to have that bit of youthful enthusiasm, those girls have always held their own and have done their job to make the team today.

"They'll bring their energy and we'll bring ours as well and try and keep a level-head if anything, so I think it's a great balance. We all play a role in the team and I think that will work really well on the diamond."

30-year-old Kaia Parnaby said being able to fulfil her Olympic dream that was sparked being in the stadium for the Opening Ceremony of Sydney 2000 was an emotional journey.

"It's surreal, going from a 12-year-old watching the Olympics, to getting the chance to actually compete in the Olympics it's something that I only ever dreamed of," Parnaby said.

"Waking up this morning, my nerves were running through my whole body, my heart rate couldn't get below 100 as soon as my name got called to go in the selection meeting. The thrill of hearing your coach say ‘congratulations, you're going to an Olympic Games' - I'm still getting caught up in the emotions, it hasn't really sunk in yet."

Parnaby said living, training and competing in Japan the last month has the team ready for the competition.

"Being around our teammates all the time, we have this bond that no one else shares with us, we have a camaraderie that brings us closer. I think the closeness of our group has helped us get through. 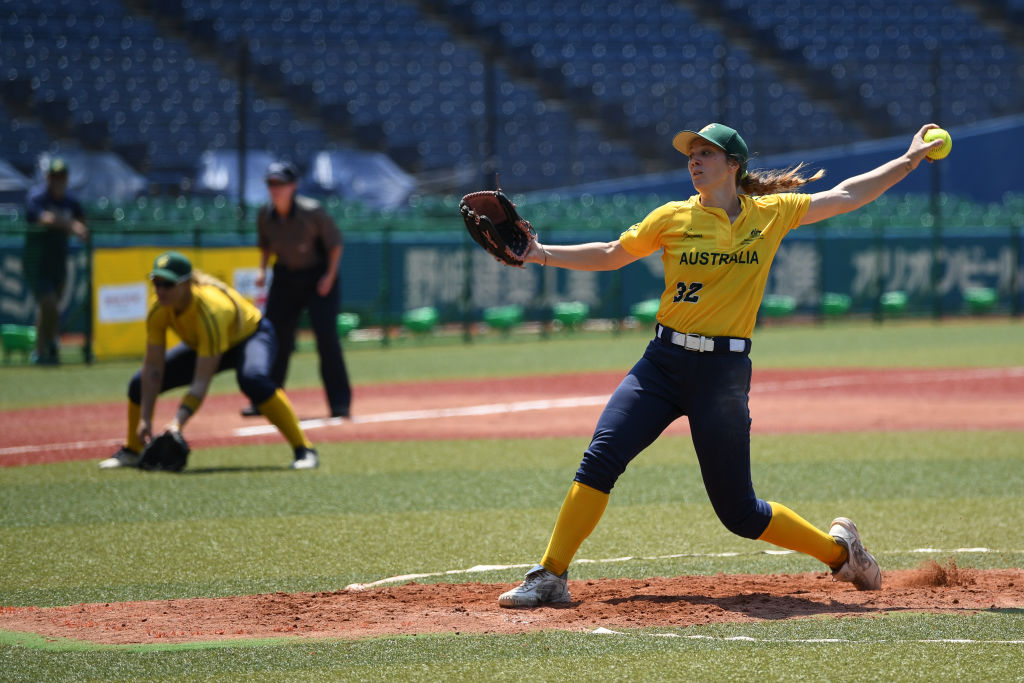 "We've been here for a month, that's a long time to spend with just each other, but we've done such a good job in knowing when our teammates need time to chill by ourselves or when we need to be with each other and soak up the moment - we're preparing for an Olympic Games."

Coach Laing Harrow was excited to see the team in action in the Olympic competition having seen over 20 games worth of on-diamond action since touching down in Japan.

"After a tough few weeks in Japan, I'm excited about the potential of our final team selected for Tokyo," said Harrow.

"Arriving in Ota City early for our final selection camp has given us the best possible chance to prepare for the sport's return to the Olympics and I'm really pleased with how the players have been performing both on and off the diamond, and under difficult conditions.

"The Japanese people here in Ota have been very welcoming, and we can't wait to repay their hospitality by officially opening Olympic competition against Japan."

"It's such an honour for our sport and country to be the first competitors at the Olympics against the host nation," said Pryles. "Our team are terrific ambassadors for Australia and all 15 have shown great poise preparing for Tokyo under tight restrictions to keep them safe.

"I would like to acknowledge our Aussie Spirit captain Stacey Porter who has shown such great dedication and passion for softball, justly rewarded with selection to her third Olympic Games, an incredible 13 years since her last appearance. I hope the entire country can get behind our Aussie Spirit come 21 July, and cheer us to fifth Olympic Medal."

Janice Blackman, Shannon Keevers and Tamieka Whitefield have been named as the travelling reserves. If called up to the team due to injury or other circumstances, they would be selected to the Australian Olympic Team at that time.

The Softball competition will run from 21 -27 July at venues around Japan. Find out more about Softball at the Olympics in the infographic below. 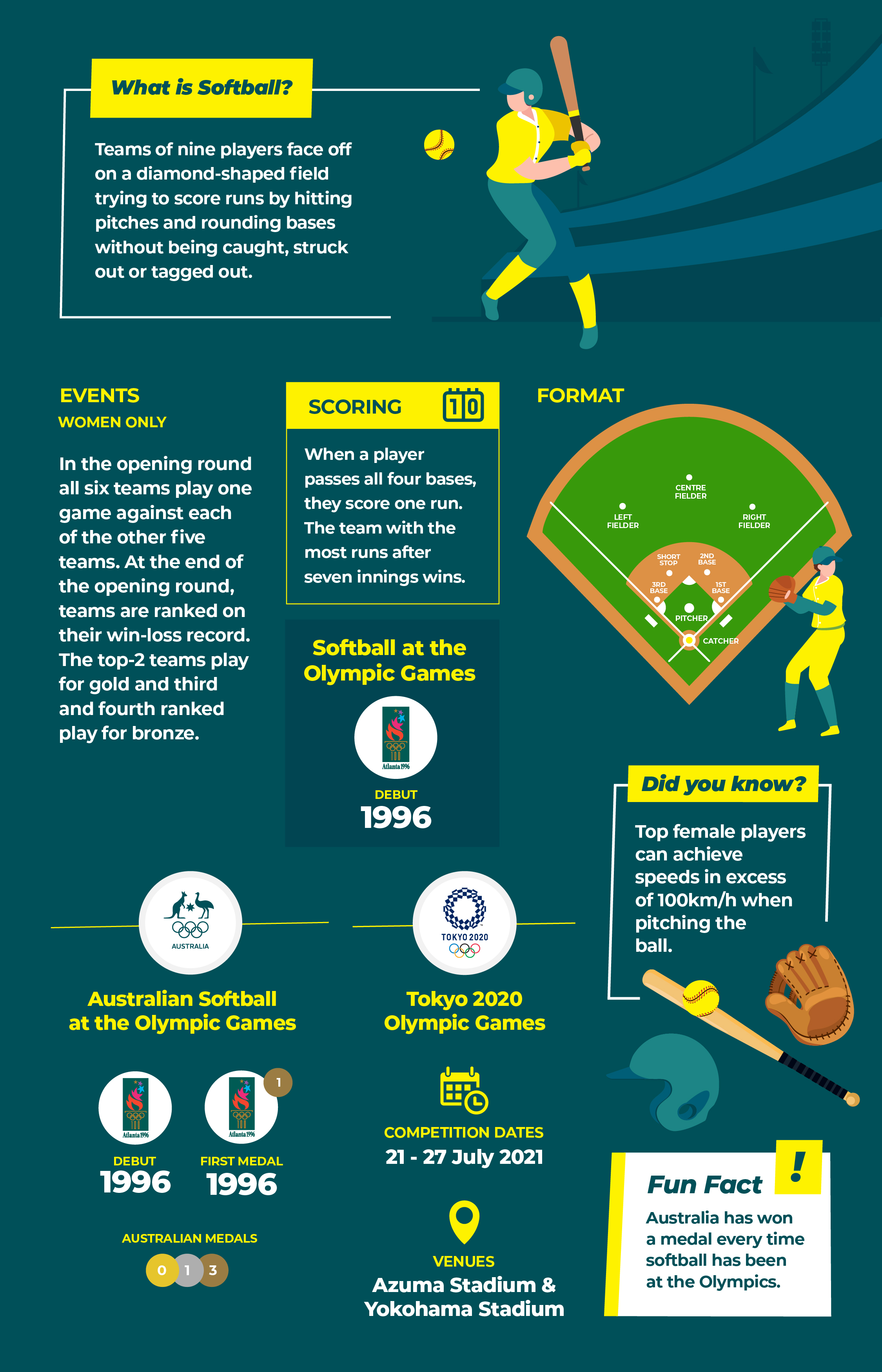