If Ariarne Titmus is to create history by winning the 200-400-800m Olympic treble, she will have to put in her toughest day at the Tokyo pool on Saturday after Katie Ledecky reasserted herself with a dominant swim in the 800m heats tonight.

Titmus might have finished ahead of the American legend in the 400m freestyle and then repeated the feat in the 200m final, but it is clear that Ledecky is building steadily at this meet, as her anchor leg of the 4x200m freestyle relay to overhaul the Australians demonstrated.

She carried that ominous form into the evening heats, unleashing a time almost an exact match of Titmus' career-best clocking, 8.15.67. The scary thing was that she completely backed off over the final 20m, allowing her 15-year-old countrywoman Katie Grimes (8.17.05) and world championship silver medallist Simone Quadrella of Italy (8.17.31) to close the gap on her.

Titmus, by contrast, had to battle through the preceding heat. After the highs of the first half of the meet, she now is having to deal with the emotional strain of all she has achieved. The Terminator she might be, but that's only a nickname. She is not a machine.

So she lacked the spark to shake off Anastasia Kirpichnikova throughout her heat swim on Thursday night, seemingly having nothing left to fight her off as the Russian drew level right at the death and then got to the wall just ahead of her in 8.18.77. Titmus' time was three seconds slower than her winning time at the Olympic trials last month, 8.18.99. while her Australian team-mate Kiah Melverton just missed a "pb" in placing third in 8.20.45.

It can't be forgotten that Titmus is competing in her first Olympics whereas Ledecky is at hear third – and with two 800m gold medals already in her keeping after winning this event at London and Rio. Indeed, while Titmus might have played havoc with her unbeaten Olympic record, the fact remains that a win on Saturday would propel her into the highest echelon of the Olympic pantheon. A threepeat would allow her to join Dawn Fraser, Kristina Egerrzegi and Michael Phelps as the only swimmers ever to win the same event at three consecutive Games.

With world record holder Regan Smith having a shocking finish at the US Olympic Trials, suddenly the 200m backstroke has become wide open. And that is exciting news for the Australian who already has the 100m backstroke Olympic gold medal to her credit, Kaylee McKeown. She is now two seconds clear of the field and she made certain everyone was aware of that by leading the field into the semi-final stage. Her 2.08.18 was almost four seconds outside her best but it still provided her with a fractional edge over Canadian Kylie Masse and Rhyan White, one of the Americans who ousted Smith from this event. They deadheated – again – in 2.08.23 while the second American Phoebe Bacon was fourth fastest in 2.08.30. Four-time Olympian Emily Seebohm was eighth fastest in 2.09.10 – or at least equal eighth fastest, with the electronic timing equipment unable to separate her from Katalin Burian of Hungary.

"My goal is to not use up all my energy and I'm trying to preserve as much as I can," said the 29-year-old veteran.

Certainly, McKeown looks to have made a wise decision to drop the 200m individual medley from her Games program here. Without the extra three races that would have involved, she is looking much fresher. She already has rectified one historic discrepancy by winning Australia's first ever Olympic 100m backstroke title and she now is looking to repeat the dose for the 200m.

Fresh from his epic and nail-biting victory over Kyle Chalmers in the 100m freestyle earlier today, American Caeleb Dressell was almost swaggering as he turned his attention to his other targeted event, the 100m butterfly. He coasted through his heat in an Olympic record 50.39sec, looking almost unbeatable.

Keeping him in check, however, was Kristof Milak of Hungary, whose own confidence knows no bounds after he also won the 200m butterfly here. He won a previous heat in a solid 50.62sec.

Australia's Matthew Temple had to wait until Day 6 of swimming before having his first individual swim and he cleared out the cobwebs nicely with a 51.39sec swim which took him through as eighth fastest qualifier. Team-mate David Morgan was not so lucky, posting a 52.31sec heat swim, which missed the semi-final cut-off by .57sec.

The meet ended on a fun note as the first mixed medley relay in Olympic history threw men and women into the pool together – and in no particular order.

Australia went with the unusual mix of a male backstroker (Isaac Cooper), a male breaststroker (Zac Stubblety-Cook) and then closed out with its two female competitors, Brianna Throssell (butterfly) and Bronte Campbell (freestyle), whereas Britain and the USA went with the girl-boy-boy-girl combination. 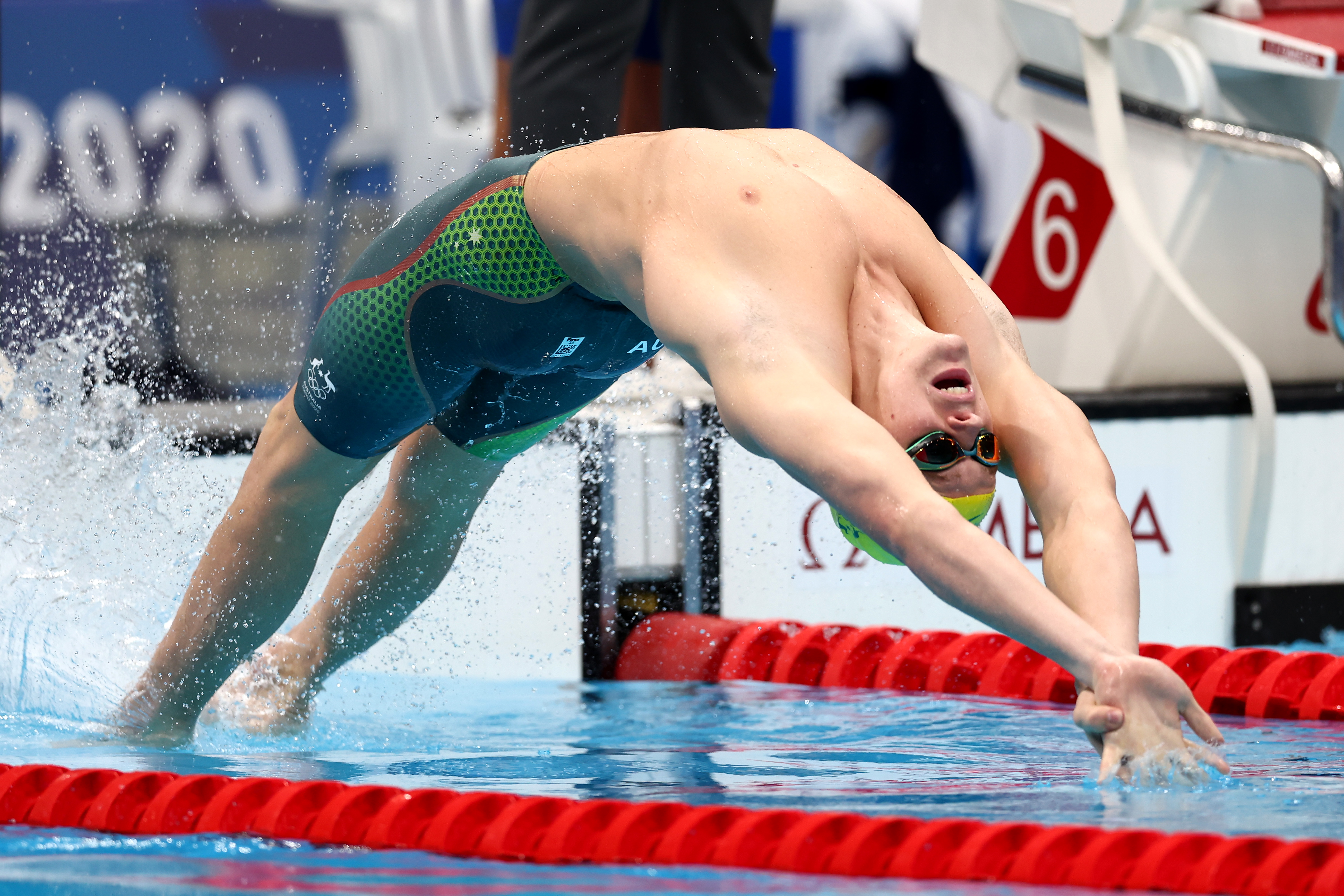 It mattered little as they all qualified for the final, Australia in fourth spot (3.42.35) behind the British team which gave the world record a shake with its 3.38.75 clocking, with the USA and China second and third home. But with such experienced relay swimmers as Mitch Larkin, Emma McKeon and Cate Campbell available, Australia could well change its quartet completely for the final.