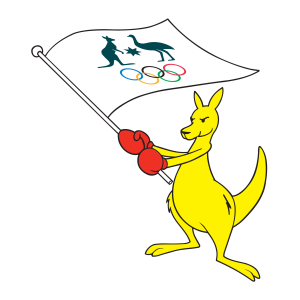 The Boxing Kangaroo has a huge amount of self-confidence and epitomises the Australian fighting spirit. This unrelenting "have a go" Aussie spirit makes him hugely popular with all Australians.

BK is not a lout, nor is he aggressive or arrogant. He is, however, assertive when it comes to defending his country's glory.

The National Museum of Australia in Canberra features the original Boxing Kangaroo flag from Australia II in its national historical collection.

This famous Aussie icon, known affectionately as "BK", has become synonymous with Australia's proud sporting heritage and as such has become arguably Australia's favourite supporter mascot. The BK flag represents a powerful green and gold visual that symbolises Australia's confident approach to sport.

The Boxing Kangaroo is not aligned to any particular sport and, although he has been adopted as the official mascot for the Australian Olympic Team, BK can be seen at any sporting event, and many cultural ones, where Australia is participating.

The Boxing Kangaroo is a unique and powerfully emotive symbol with broad appeal to Australians and tourists alike. BK is also a great symbol for the younger generation as he represents the positive values and virtues of sport: aspiration, positive attitude, sportsmanship, pride, individual responsibility, respect and expression. These same qualities are what drive Australia's pursuit of success on the international sporting stage. 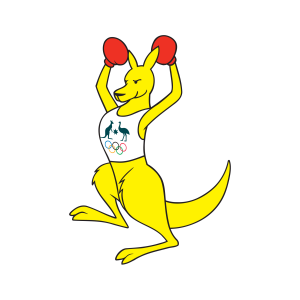