She has done it. Ariarne Titmus has beaten the greatest female swimmer in history, Katie Ledecky of the United States in a moment that will go down into Olympic immortality.

Ledecky is the closest women's swimming comes to Michael Phelps, a phenomenal athlete who has never been beaten in individual events at the Olympics – until now. But her 20 Olympic and world championship titles were no defence to the remorseless attack of ‘The Terminator', as Titmus stalked her for 350m of the 400m freestyle final before pulling away down the final stretch.

Only Ledecky's world and Olympic record of 3:56.46 survived the Australian's onslaught and Australian Record of 3:56.69 but never has it been more obvious that record, even world records are temporary. An Olympic title is forever. 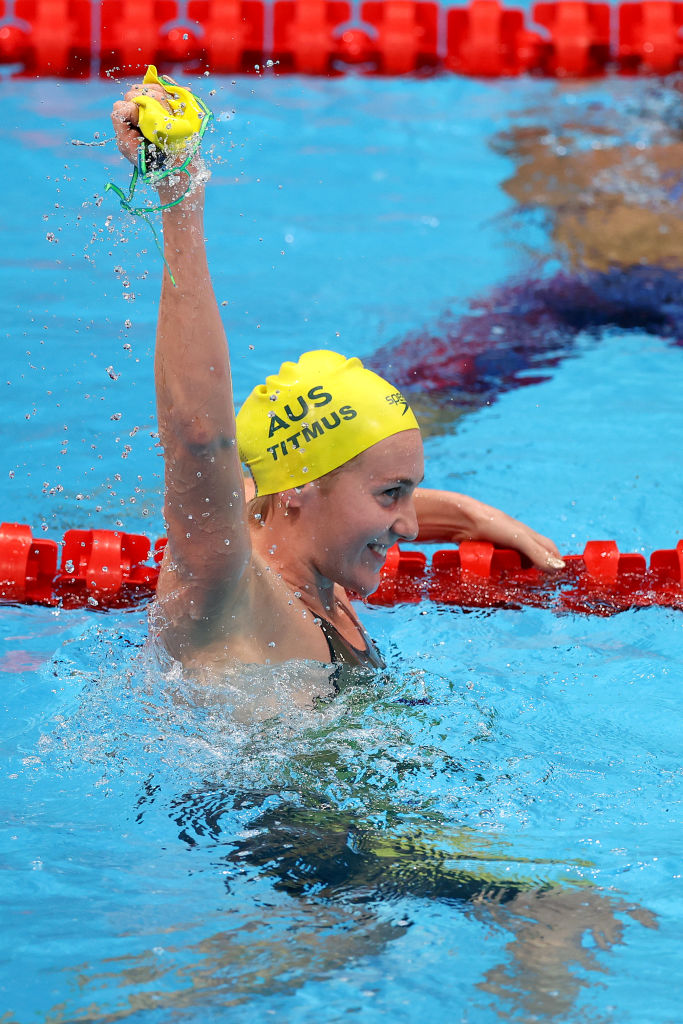 It was the first individual gold by an Australian at these Games and the rivalry will continue as she and Ledecky will bump heads repeatedly in the coming days in other freestyle events. But this was the one Titmus always wanted.

She had scored an historic victory over Ledecky in the 400m freestyle at the 2019 World Championships but the American shortly after complained that she was unwell and scaled down her program. At that point, the 20-year-old Brisbane-based Tasmanian refused to consider she had bettered Ledecky. Now there is no reason why Titmus, with the world and Olympic titles now in her keeping, should not consider herself the queen of middle-distance freestyling.

Her coach Dean Boxall was out of his seat throughout the race, out of control. And why wouldn't he be? The two of them have plotted this moment for years and have practiced her race until she could do it in her sleep. "Dean means everything to me," said Titmus. "We knew exactly what we had to. We have practised this for so long."

Even considering the scope of her achievement, Titmus was trying to hold it all together. She has the 200m freestyle heats tonight and her ambitions rightly know no bounds.

"This past year, I don't know whether it has gone fast or slow. But I'm over the moon.

"I thanked Katie in the pool. I wouldn't be here without her. All credit to her for being the swimmer she is. I can't believe I pulled it off."

Titmus' family were all gathered in Noosa to watch her race, alongside a legend of the sport in Dawn Fraser. But it was the family which has sacrificed so much for this moment, quitting Tasmania to move to Brisbane to allow her to train with Boxall. Indeed, she is now the first Tasmanian to have won an individual Olympic title. She is also the first Australian to win this event since Shane Gould at Munich 1972. Lorraine Crapp was the first at Melbourne 1956.

Ledecky did everything in her power to shake off Titmus, leading out hard and opening up a .66sec lead at the halfway mark, a lead she held through the next 50m. But she must have known that would not be enough. She knew from harsh experience how Titmus refuses to relent and by the time they turned at the 300m mark, the lead was cut to just .16 of a second.

Now the race was on. No place to hide. Eyeball to eyeball they raced down the seventh lap and it was here that the Australian finally took over the lead. It was a mere .22sec at that point but with the television graphics showing that Titmus was travelling at 1.66m per second, compared to Ledecky's 1.64, there was always going to be only the one result. Ledecky closed for the silver with a 3.57.36 clocking while China's Li Bingji demonstrated just what a barrier the four-minute mark is as she claimed the bronze in 4:01.08. 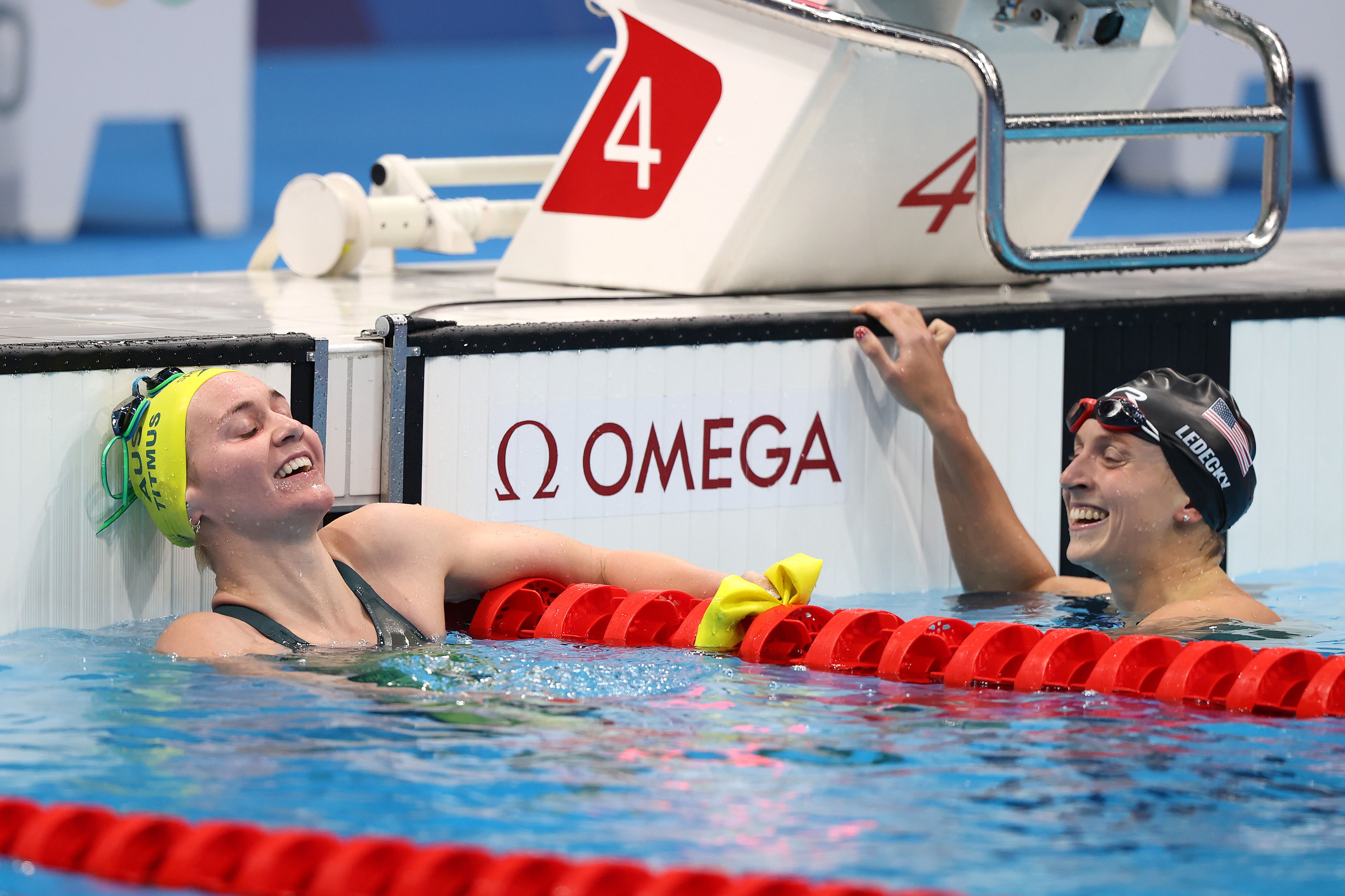 Topping it off for Titmus, her medal was handed to her by the vice-president of the International Olympic Committee and the president of the AOC, John Coates. He was the man most responsible for the 2032 Olympics being delivered to Brisbane and with Titmus announcing that she wants to swim on and on, it could well be that she will bring up her fourth Olympics in another 11 years.

Having claimed relay gold on Sunday, Emma McKeon opened her individual account at the Tokyo Games with a gallant bronze in the 100m butterfly, finishing just .13sec away from the Olympic title.

The 27-year-old, who delivered a stunning leg in the gold medal real triumph, a sizzling sub 52sec swim, delivered her best time in the fly final, a 55.72sec swim for a new Australian Record. But it was not enough to hold off reigning world champion Maggie MacNeil of Canada (55.59). China's Zhang Yufei, the fastest swimmer in the semis, separated the pair with an Asian Record *55.64).

McKeon trailed slightly at the start and was fourth at the turn as Zhang led the way. Although the world record of Sarah Sjoestroem (55.48sec) set at Rio 2016 survived the onslaught; this was an exceptionally quick field. Indeed, spare a thought for American Tori Huske who finished one-hundredth of a second behind McKeon in fourth spot. Sjoestroem who many thought wouldn't make it to Tokyo after breaking her elbow in February, was last at the turn and finished sixth in 56.22.

The bronze medal provided redemption of sorts for McKeon who had finished sixth in this event at the Rio Games of 2016. And inevitably it propelled her higher up the list of medal winners at the Olympics. With still the bulk of her program still to come, she now has a total of six medals, equal with Murray Rose and Michael Klim. As the meet goes on, she could move above Libby Trickett (seven), Susie O'Neill, Dawn Fraser and Petria Thomas (eight) and the our two greatest swimmers, Ian Thorpe and Leisel Jones (nine).

Australia finished with three medals from the session with the men's 4x100m freestyle relay team backing up from McKeon and Titmus to win the bronze. Following on from the three swimming medals for Australia from the opening day of finals. 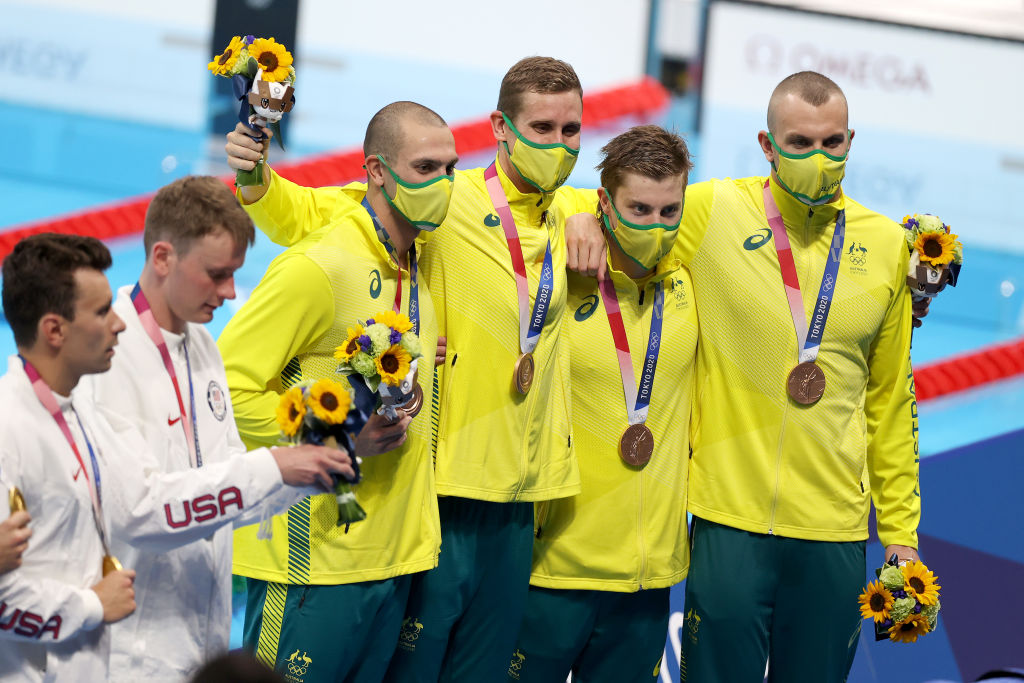 The Americans always had this race well in their keeping, especially after using Caeleb Dressel, the alpha male of men's sprinting, in the lead-off leg. But Australia hung in throughout with great swims by Matt Temple, Zac Incerti and Alexander Graham. And with reigning Olympic 100m freestyle champion Kyle Chalmers swimming a mind-blowing anchor leg of 46.44, Australia was able to grab the bronze just ahead of Canada. The USA (3:08.97) were pushed throughout by a superb swim from Italy (3:10.11) for silver.

McKeown, Seebohm and Larkin through Australia's only individual world record holder, Kaylee McKeown is into her first Olympic final in the 100m backstroke and her team-mate and four-time Olympian Emily Seebohm was right on her shoulder and also progressed in style.

McKeown (58.11sec) was just touched out in her semi-final by former world record holder Kylie Masse of Canada (58.09), with Seebohm, a former Olympic record holder and silver medallist at the London 2021 Olympics, unleashed her joint equal fastest time (58.59) to qualify sixth fastest for the final. The first semi-final winner, Regan Smith (USA) grabbed pole position for the final with a sizzling 57.86sec to break McKeown's short-lived Olympic record from Sunday night. 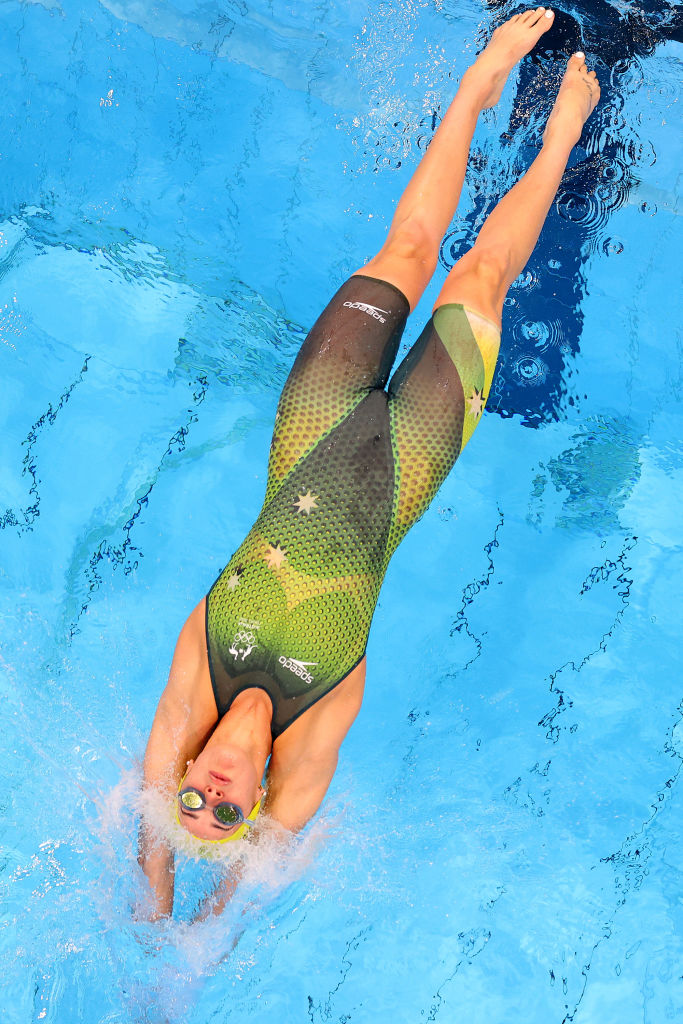 Mitch Larkin, the former world champion, surged into the final of the men's 100m backstroke final in third spot (52.76), surfing through in the wake of American Ryan Murphy (52.21) while Russian Kliment Kolesnikov was second fastest in 52.29.

Not every swim went to script for Australia at the Tokyo Aquatic Centre with Thomas Neill just missing the final of the 200m freestyle by an agonising .03sec. His personal best of 1:45.70 at the Trials would have snuck him in by .01sec. And 19-year-old Chelsea Hodges suffered the same fate in the 100m breaststroke. She swam 1:06.60 to miss by .01sec.

The Australian Swim Team will be back on pool deck from 8pm (AEST) with a busy schedule of heats.

Today's Medallists in the Pool