The first Australian competitors in Equestrian were in the three-day event of the 1956 Olympics, which were held in Stockholm instead of Melbourne due to the strict Australian quarantine requirements for horses. The first Australian medals were won in the three-day event in Rome in 1960 with Laurie Morgan and Neale Lavis winning the gold and silver medals respectively in the individual contest and then being joined by an injured Bill Roycroft to win the team event.

Bronze medals in the three-day team event followed in Mexico City in 1968 and Montreal in 1976. Barcelona 1992 saw Matt Ryan win the individual gold medal in the three-day event and combine with Andrew Hoy and Gillian Rolton to win the team competition.

After an eight year hiatus from Olympic competition, Hoy sparked a magic return to form to qualify for the London Olympics where the team finished sixth. Hoy carried the flag in the Opening Ceremony in Atlanta and was also selected in the equestrian squad for Moscow 1980 but the sport was withdrawn from the Australian team that eventually competed in the Olympics.

The Roycroft family has also been prominent in Olympic equestrian. Bill Roycroft competed in five Olympics and three of his sons, Wayne, Barry and Clarke, and Wayne’s wife Vicki, are all Olympians. Bill carried the Australian Flag in the Opening Ceremony in Mexico City and Wayne did likewise in Los Angeles in 1984.

Australia won three consecutive Gold medals in Team Eventing (Barcelona 1992, Atlanta 1996 & Sydney 2000) which is the only time it has been achieved. Hoy was a part of all three teams making him the only other athlete at the time other than Dawn Fraser to achieve this milestone. Hoy is vying for his eighth Olympic Games at Tokyo 2020.

Australia has not won a medal in Olympic jumping nor dressage events with the best performance being a fourth by Thomas Fahey in the grand prix jumping in Tokyo in 1964. Demonstrating how tough the London 2012 jumping competition was, Edwina Tops-Alexander, the highest ranked female jumper in the world, finished 20th after a small error in the first round of the final.

Equestrian has been part of the Olympic program since Stockholm 1912, when 62 competitors from ten nations with 70 horses were involved. To begin with, only military officers were allowed to enter the Eventing competition; Dressage and Show Jumping were open to all, but few civilians took part.

This changed at the Helsinki 1952 Games - when women also took part for the first time. Today, Equestrian medallists come from a wide range of backgrounds and countries. 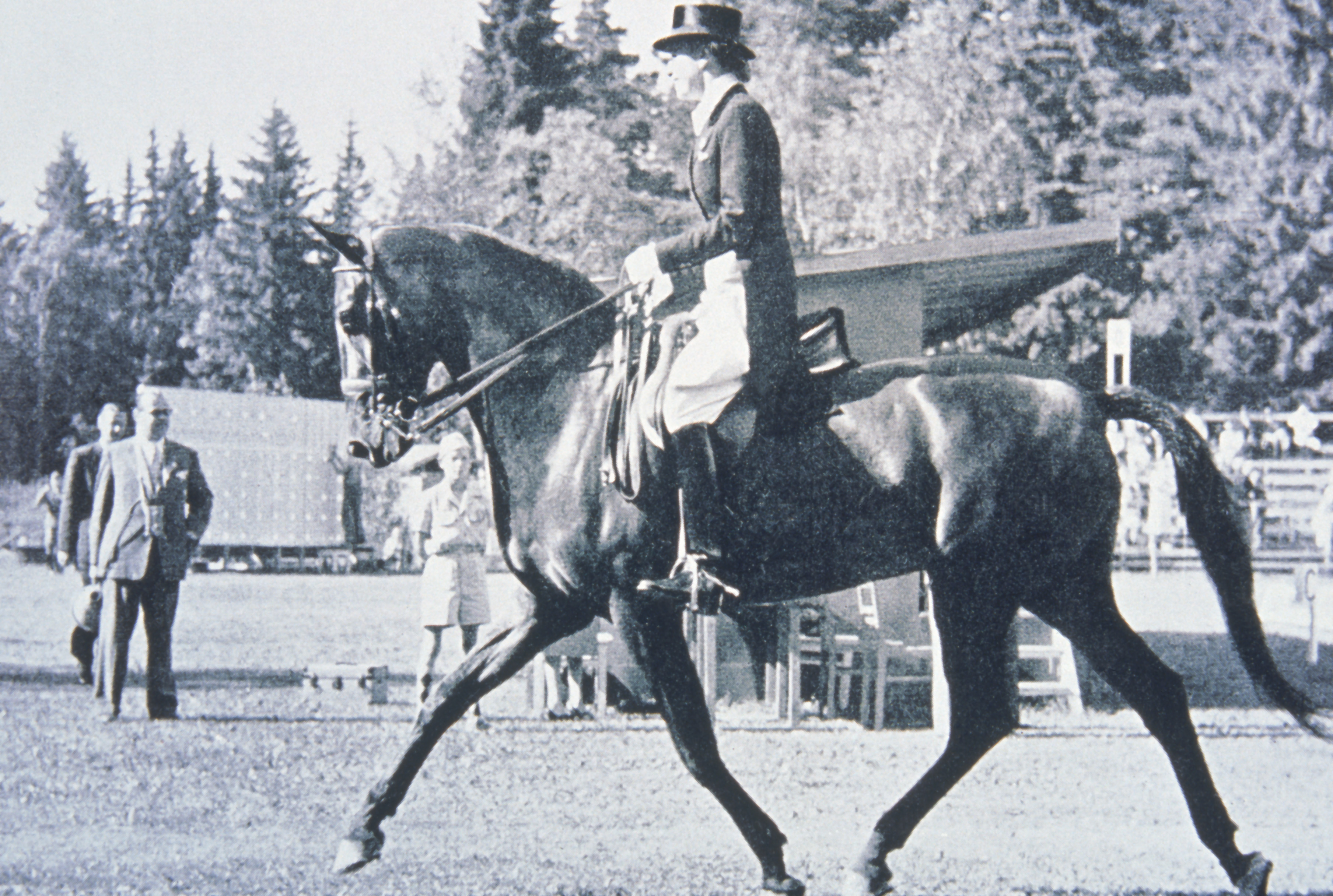 Equestrian is the only Olympic sport where man and animal are established teammates, and one of the few where men and women compete on equal terms. There are three disciplines in the equestrian events in the modern Olympics: Dressage, Jumping and Eventing (now contested over four days) with an individual and team event in each, making six events in total.

Meaning training in French, dressage demonstrates the horse’s ability to respond to the rider’s commands as it performs a series of movements in a prearranged order. Riders must memorise the moves and can’t use their voice to guide their horses. The scoring is done by judges who evaluate how well the horse executes the moves.

Consists of negotiating a series of obstacles within a set time. The fences are designed so that if the horse hits them as they jump them, part or all of the fence will knock down and the rider will be penalised with ‘faults’.  Faults are also awarded if the rider does not complete the course within a set time. The winner is the rider with the fewest faults. If there is a tie, the result is decided by jumping a shortened course as fast as possible without knocking fences down.

Takes place over four days. Days one and two are Dressage, day three is Cross Country and day four is Jumping. The Dressage and Jumping phases are similar to the pure Dressage and Jumping competitions. In the Cross Country event, riders have to complete a course over natural terrain of between 5,700m and 6,840m. The course contains solid obstacles that test the nerve, boldness, scope and partnership of horse and rider; faults are awarded for refusals, run-outs and exceeding the specified optimum time. If the horse and/or rider fall they are eliminated from the competition. The winner is the team or combination that incurs the least number of penalties. The team and individual events are held at the same time, with a second jumping test to determine the final rankings for the top individual riders. 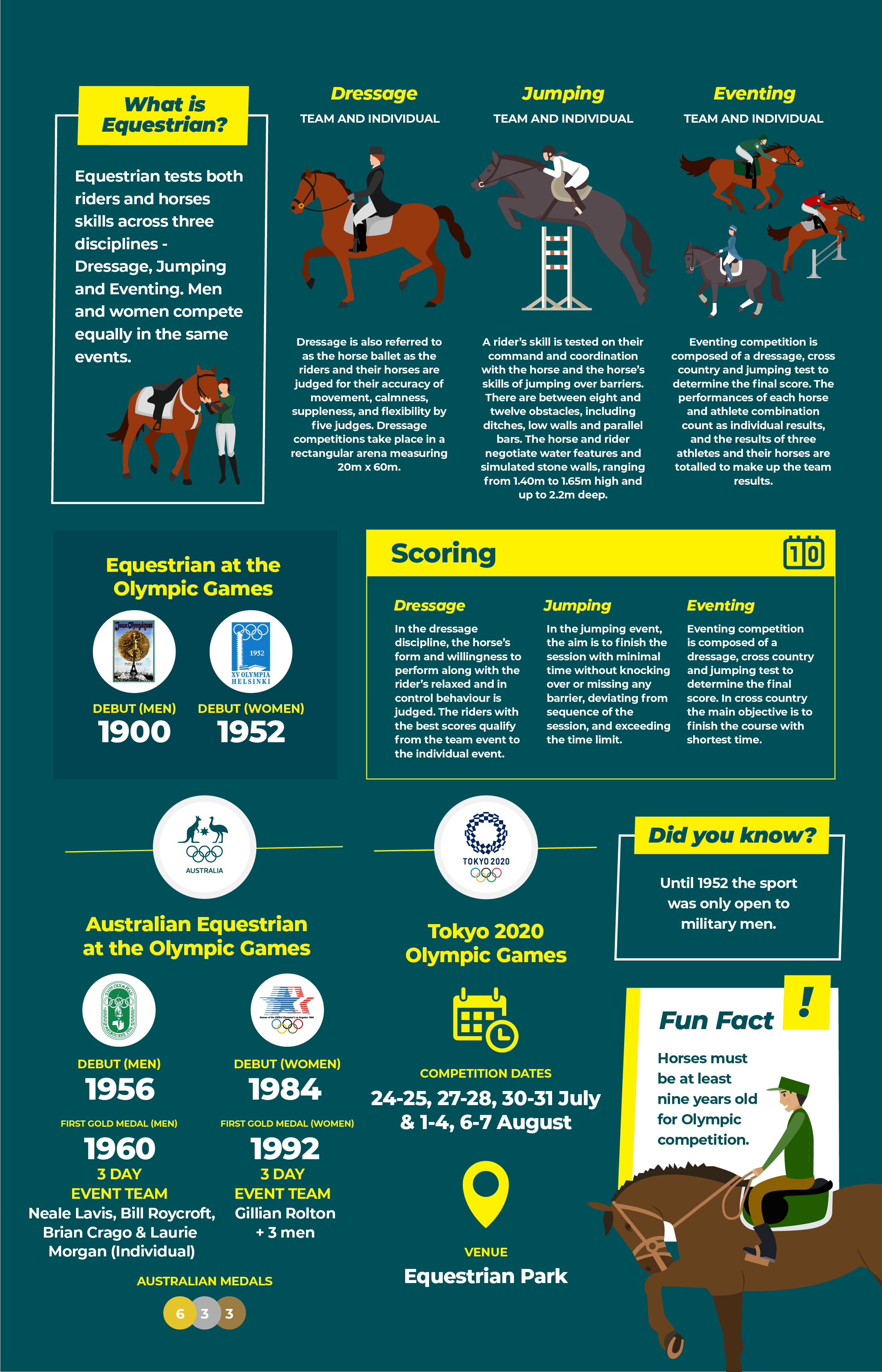 One Minute, One Sport | Equestrian

END_OF_DOCUMENT_TOKEN_TO_BE_REPLACED

Want to have a go at Equestrian, or find the nearest club to you?