Of all Australia’s victories in the Olympic Games, undoubtedly the most bizarre was that of Steven Bradbury in the 1000m short-track speed skating final at the Salt Lake City 2002 Winter Games. Bradbury, whose gold medal was the first ever won by an Australian at the Winter Olympics, was dubbed “the Accidental Hero” after his four rivals all collided, tumbled and sprawled around the ice, leaving him to skate alone past the finish line. This sensational scene marked the end of a career which had embraced four Olympics, an earlier bronze medal, much sacrifice, and some horrific injuries. At 17, Bradbury was a member of the squad that won the world short-track relay championship in 1991, subsequently selected for the Olympics in Albertville in 1992, they were eliminated in the semi-finals after two of them fell. Two years later, in Lillehammer, Bradbury, Richard Nizielski, Andrew Murtha and Kieran Hansen won Australia’s first winter medal ever: a bronze in the 5000m relay.

A year later, Bradbury was involved in the first of two career-threatening accidents. In a crash in Montreal a rival’s skates sliced through his right thigh, requiring 111 stitches and 18 months’ recovery time. In 2000, in Sydney, he crashed into a barrier during training and broke his neck; he was told he would never skate again. In the Salt Lake City 1000m final, he adopted wait-and-see tactics, figuring that some kind of accident was likely, and the plan paid off. After winning his gold medal, Bradbury struggled with conflicting emotions. He finally, sensibly, came to see it as a reward for 12 long years of toil.

END_OF_DOCUMENT_TOKEN_TO_BE_REPLACED 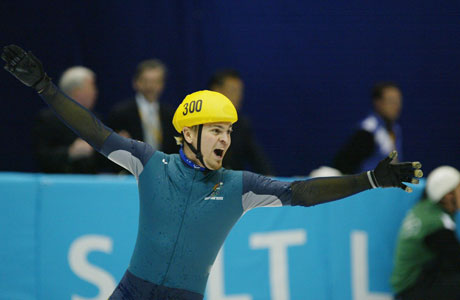